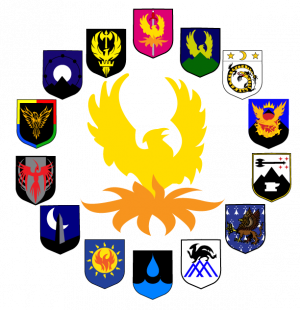 All the kingdom's heraldry, by Alona Twotrees

In the last four years, we have reported somewhat of a downwards swing in growth. 73 chapters were founded in 2009, and 40 chapters in 2010. But it seems that we are back on track - this year we had 46 new chapters that were created or reformed. Steady wins the race, and we are winning; slowly filling the borders of the US and starting in on some other countries too. At the time of writing we have broken three hundred. There are 304 active known chapters playing Amtgard in five countries under 14 kingdoms and 8 principalities. In the Ye Old Records roles we list 504 groups that are no longer active.

The big winners for chapters this year were the unlikely states of Kentucky and Washington with four new chapters each. Missouri and New York also came out winners with three new chapters each. Classic areas of growth like Texas and Colorado also gained groups, though at a slower rate. The chapters in Kentucky are in talks to put together an as yet unnamed principality. If formed, it would sit on the border of Winter's Edge and the Rising Winds.

Of the chapters that did spawn this year, only eight have so far have joined Kingdoms; another six have active petitions. By and large the chapters that join kingdoms are much more likely to survive their first year of life, and go on to become successful long term groups. Congratulations and thank you to Rising Winds and Dragonspine for sponsoring two new groups each.

We are pleased to report that we have reestablished contact with our brothers in arms in the Croatian chapter of Bloodhoney. They are happily involved with several forums and one of our state-side players, TyeDye, even made the trip to visit them.

Some groups have left their kingdoms this year including the former kingdom proper of Golden Plains. The chapter sited several reasons for its sudden absence, but it came soon after an althing vote to change the structure of the kingdom from Static to Floating Crown. By becoming a floating crown, Golden Plains now allows all of the members of its small kingdom to hold Kingdom level office. At the time of writing only Burning Lands, Goldenvale, and Dragonspine remain static crowns. The freehold has chosen to retain the name of the kingdom it left, and is still called 'Golden Plains'. The principality of Olympus also recently parted ways from its eponymous chapter. The Principality is still working with the Iron Mountains core about their continued status. The Principality of Stormhaven also changed its government structure this year from static to floating.

Groups to keep your eye on

Both Northern Lights and Westmarch submitted bids to the Circle of Monarchs last year and are up for Kingdom status this year.

The Northern Lights is a group of closely interrelated parks nestled snugly against our border with our Canadian neighbors. Concentrated in the Seattle metro area, these parks have been playing Amtgard and growing in a unified community for more than 15 years. The principality of the Northern Lights regularly sends members to both regional and National events, and is host to a legacy of strong fighters and exciting events. Currently the Northern Lights is seeking sponsorship under the leadership of their parent kingdom, Blackspire.

Westmarch is located in California under Dragonspine. California has had active chapters since the mid to late nineties, and originally it housed a principality like group called the Crystalline Confederacy that was under the Celestial Kingdom. Westmarch is a solid collection of parks that spans most of California. Inter-park travel and multi-group events are rampant. Membership is strong and full of many talented up and comers and veterans. Westmarch has been operating as autonomously as possible for the past few years with Dragonspine's blessing and encouragement.

Also look forward to a future bid from the Northern Empire. The principality, located in Southern Ontario, Canada and upstate New York was created by Goldenvale in April of 2010, though work started on the process and ideas much earlier in 2007. The core groups have traveled between one another frequently since their individual inceptions, and the presence of the principality has solidified that. They have been working closely with Goldenvale over the past years to establish themselves as an independent collection of chapters with a floating crown structure.

Knighthood; and the state of it

There have been, in the history of Amtgard, 586 people inducted into the peerage. Between them, they have received 833 belts; 194 Crown, 325 Flame, 199 Serpent, and 115 Sword. This year 41 players received knighthoods in 42 orders up from 23 players last year. Of the belts received 12 were Crown, 15 Flame, 11 Serpent, and 5 Sword. 30 of the belts were firsts, that is - given to people who had never been knighted before. Eleven of those given were second belts, and one, Kamal Mustafa of Golden Plains was a fourth. There were no triple belted knights created this year.

The Celestial Kingdom again topped the lists knighting eleven individual players, many of those given in a single reign. That is seven more knighthoods than the kingdom gave out in 2010. The Golden Plains took second, knighting eight individuals, nine times. Monkey was belted at Spring War and Clan in the orders of Serpent and Sword respectively. Rising Winds created five new knights this year, and Iron Mountains made four, the Desert Winds created three. Crystal Groves, Blackspire, and Burning Lands each made three new knights. Tal Dagore, Emerald Hills, Goldenvale, and Neverwinter each knighted one. The Wetlands was the only kingdom to forgo knighting this year.

Early last year the Wetlands Circle of Knights voted to remove Silvertip from the peerage. This decision was appealed to the Allthing the next day, where it was upheld by the populace of the Wetlands.

Raban, a sitting regent of the Golden Plains, was knighted by the Celestial Kingdom. While he had moved to the CK, he was still an officer of another kingdom and the Golden Plains did not give it permission for the knighting. The legality of the knighting was disputed, but later dropped due a lack of supporting evidence from people of the Golden Plains. The incident led to a discussion between the Circle of Monarchs, who are still wording a rule that would forbid it from happening again.

Make an effort this year to meet people from other groups, and to support your local chapters. It is our responsibility, each of us, to help keep the players we have as well as gaining new ones. Please feel free to contact us if you have questions about the report, the wiki, or the ORK. We would be happy to help. Thanks to the staff of the Wiki, and to all 145 chapters who reported back on their audit this year. And to my deputies, Wat for Rising Winds, Werebear for freeholds, Potato the fastest gun in Crystal Groves, Yoto for Rivermoor and Ausric of The Northern Empire for their help and dedication. To Grix, Trieste, Ausric, and for their help on the 'chapters to look out for'. And to Diana and Savaen for their help with editing.