Lady Alura joined Amtgard by way of Astral Winds, under the banner Dragonspine, in February 2004. She stepped up to serve the Duchy first as Regent and Monarch Pro-Tem, in 2005 and again as Regent Pro-Tem in 2013. In 2019 she joined The Kingdom of Westmarch and is currently serving as Sheriff of Nymyr's Sanctum. 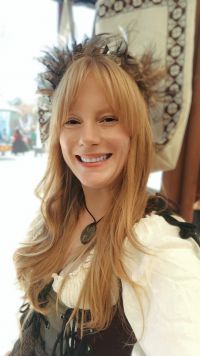 Alura is affiliated with a small number of households, companies, and project initiatives. With a desire to help grow the game she takes inspiration from influential Amtgarders that have come before. Her focus is on fostering a healthy A&S culture and encouraging others to grow their leadership skills.