I play the flute and shit... 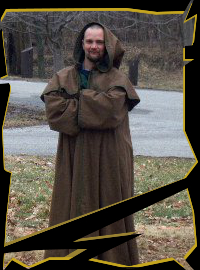 Anavrin began playing Amtgard in late 1999 at Grypon's Perch where he still remains today. Anavrin was a founding member of the Golden Band and has since founded Dark Harvest in 2007. Anavrin played other foam fighting games before Amtgard including Myth and Kanar.

While most players in the Rising Winds who know Anavrin well also hold a great deal of respect for him for a great number of reasons, they all agree unanimously that he's probably ghey. When pressed for proof of said accusations, Anavrin's peers insist that he loves the vaj often citing his history of repeated vaj procurement and efforts to maintain vaj proximity via gifting and sweet-talking various "ladies". However, most if not all are simultaneously forced to admit that he is also a swimmer and a master flautist who would "...probly do a guy without too much prodding". This conversation usually precedes the reluctant admittance that at the very best, Anavrin likes the D equally as much as the vaj.

Anavrin was squired to Sir Glavas.