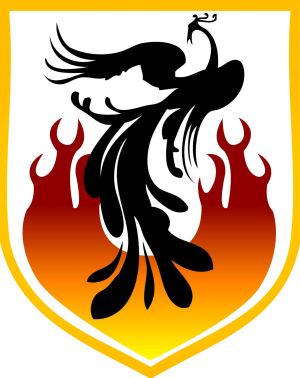 A black phoenix above flames on a white field: a common heraldry for Anti-Paladins who have attained Knighthood

Anti-Paladin is a prestige core class gaining martial prowess through fear and death.

Class created by Morluk the Merciless

These are the standard bad guys of legend. Almost any adversary in a stock fantasy movie can qualify as an Anti-Paladin, but historical cases abound – ranging from Vlad Dracul’s persecution of Turkish prisoners to Mongol warlords boiling opposing chieftains alive.

Garb:Openly displayed black dragon on clothing or armor and medieval/sword and sorcery looking garb. Knights may wear a white belt and black phoenix instead. Requirements: Must be 6th level in at least one class.
Look The Part: Awe 1/life (m)
Armor: 4pts
Shields: Large
Weapons: All Melee, Javelins

T: Enchantment S: Death R: Self
M: Red strip
I: “I coat these weapons with a deadly poison” x2
E: The next Wound dealt by the bearer in melee is Wounds Kill.

T: Verbal S: Death R: Touch
I: “Steal life”
E: Caster may heal a wound or instantly Charge an ability.
L: May only be used on a dead player. That player is Cursed. Does not work on Cursed players. The caster does not gain the effect if the dead player is unaffected.
N: In order to charge an ability, the name of the ability being charged must still be stated immediately after the incantation.

T: Verbal S: Command
R: 20’
I: “I command thee awed” x3
E: Target may not attack or cast magic at the caster. Target must remain at least 20’ away from the caster unless forced there by another Magic or Ability.
Lasts 30 seconds.
N: If the caster attacks or begins casting another magic at the target, this spell’s effect is negated.