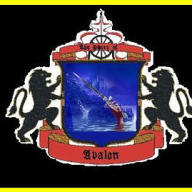 Heraldry for the chapter of Avalon

Founded some time in 2003. Formerly under the first Principality of Tal Dagore before it disbanded. It was known to have gone inactive around 2006-03-12. In 2012, the group reformed in Ava, Missouri as a Freehold of the Burning Lands and in 2012 petitioned to join the Kingdom of Tal Dagore at KotB, but dissolved soon after in December of 2013 and is now defunct.

(This park no longer meets and is defunct.)