The life blood of the Kingdoms, with too few we grow pale and die, with too many we drown. 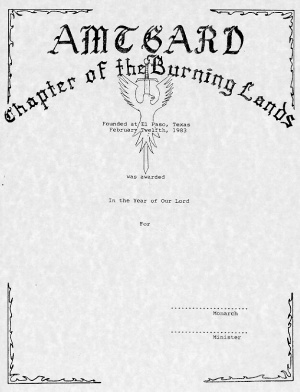 Blank Award from the 'Chapter of the Burning Lands'

An award is given to people for excelling in any area of Amtgard. Awards vary greatly from garbing and fighting, to just helping out. Some, like the Dreamkeeper, are particular to their kingdom; others are universal. Kingdoms can all have or if need invent their own awards or titles for anything they see fit. Awards are described in each kingdom's corpora.

Any discussion of Amtgard Awards and honors must necessarily begin with that basic building block upon which all other awards are founded, the order. Amtgard orders, as the basic unit of service, are not congruent to their SCA counterparts. Such pinnacles of achievement in both organizations require exceptional and sustained efforts over a long period.

The first known order bestowed on anyone was an Order of the Lion given to Nashomi on April 16, 1983. Back then Lions where symbolic of loyalty to the crown, and they were the stepping stones toward the goal of knighthood (this was before the belts were spilt). At the second Amtgard Althing on July 6 of the same year he order of the lion was divided into two categories, non fighting for loyalty and honor and for fighting success and chivalry in dueling. The fighting portion later became the Order of the Griffin and ten of the orders, of lion or griffin or in any combination was considered a qualification for Knighthood. It became the practice to award knighthood without having reached ten orders and the goal of reaching ten was left in limbo. This changed in the third edition of the Burning lands Corpora, when the title of Master Griffin was created.

Closely linked to Lions and Griffons in the Order of the Warrior. This order was created also on July 6th of 1983, and as given for fighting ability and success. It's basic criteria have never changed, with progression through this order being awarded by various colored belt favors symbolic of different animals at different levels. The scale culminates with the tenth level symbolized by a Gold and Red Phoenix. Originally Warlords, the title awarded at the tenth order, were the equivalent to knights. The first Warlord was awarded to Nashomi on April 21st, 1984

The two other older awards, the Rose for Service and the Dragon for creative ability and artistic achievements remain more obscure. Record keeping in the first five years was somewhat haphazard, and some of the information has been lost forever. It is known that King Gilos presented certificates for both the Rose and Dragon in April of 1984, but we aren't sure if those were the first such certificates. Orders of the Rose were originally meant to go towards earning titles of nobility, this policy is reiterated in the first corpora of laws published March 1st 1985. However, some monarchs did not support this policy, and awarded unsupported titles. Later editions of the corpora deleted the order to title correlation and established new criteria for earning nobility. In the third edition of the corpora the Master Rose was created. It is unknown who attainted the title of Master Rose first, Tawnee and Heimdale may both be candidates.

Orders of the Dragon were originally awarded for excellent garb and then later for success in crown qualification events. Masterhood for Dragon was established at Althing on December 15, 1984. Tawnee and Joella were both listed as the first master of the Dragon in a publication released January 19th 1985. Master hood qualifications were laid down for Smiths and garbers in December of 84. These being twelve 'credits' measured in the following areas Smiths: service to the club in sponsoring and organizing, and Garbers: service to the club in garb making. These new criteria allowed more diversification in the awarding of orders. Particularly affected was the order of the dragon. It went from being a primarily garb related order to a true award for the arts. Scarhart achieved a master dragon through music and song writing. Aroina and Gwynne were the first two to receive a Master dragon after the change in it's scope.

The final historical order is that of the Owl given for achievements in the sciences. It was created by King Nashomi in 1984 and first awarded to M'Deth and Heimdale for their efforts at the Siege of the Mountain King. on June 6th of 1986 M'Deth became the first Mast Owl. 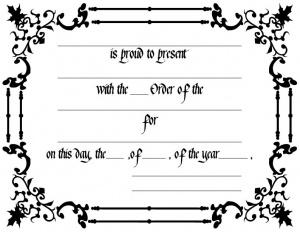 In July of 2007 a game wide Award standardization was passed by the circle of monarchs.

How and why should awards be given

Awards are given for merit. Purely and simply. In the Burning lands corpora it is said that 'each ladder award of higher level should be given for a greater level of effort or skill'.

Remember as you look to recognize others for their efforts that each award is an accomplishment. Each should be applauded and hard won. A Class Masterhood or a 1st Order of the Rose might not mean much to you, but it can mean something to awardee if you let it.

"Do pay close attention to what awards smaller groups are allowed to issue. There are rigid rules that prevent smaller groups from handing out large award to make sure standards are maintained. A person from a small group can still get higher level awards, it just has to be awarded by the Kingdom."

"Regrettably it is somewhat harder to be recognized by the Kingdom for your accomplishments performed in a small group, for example winning a local tourney or A&S with 6 competitors is not especially remarkable even if you are really good. A group that fields more competitors and keeps having the crown drop by or gets raided is tougher competition and more likely to be recognized." -Oznog

How they are recorded 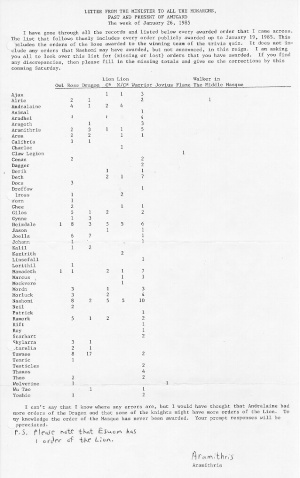 Listing of Awards and achievements in compiled by Aramithris in 1985

In the early days, it was only your word, witnesses, your certificate, and a posting in the kingdom newsletter. Now a days it it more common to use the Online Record Keeper to keep awards and credits.

In 2007 Award Standardization fundamentally changed how and why awards where given through out the kingdoms, especially that of Knighthood.

How to make your own 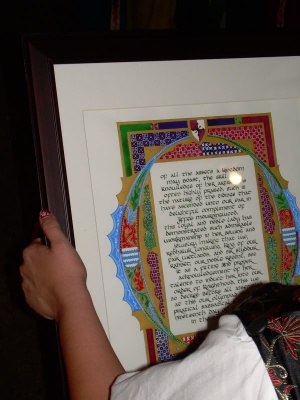 Scroll made for Jiffee on the occasion of her knighting.

For general awards, like ladder awards below five, people usually use templates. The ones linked heavily on the wiki by Alona Twotrees seem to be the most popular. You Kingdom probably has a set of templates that they usually use that you can acquire for park level awards from a kingdom official like the Prime Minister.

In the case of Masterhoods, high level ladder awards, one time awards like walker of the middle it is suggested and almost crucial that time and effort be put into the award. Each should be a testament to the achievements that earned it.

Listing of the awards as they are listed in the Amtgard Rules of Play Award Standardization.

Listing of common awards listed in most Kingdom Corpora.

Awards particular to each Kingdom