Lord of Light, Man-At-Arms Bahyurur, Of Hellig Brann, the Principality of Viridian Outlands 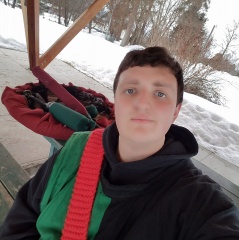 Bahyurur joined Amtgard early February in 2016. He found Amtgard of his own accord, searching for a hobby on google search. If only he had known it was around earlier, he would have joined sooner!
A natural affinity toward healer, and a genuine love for the game brought him early popularity. In his first year, he and DracoKitty revived the dead land of Hellig Brann in Deer Park, WA.

On September 24th, 2017, Received the title of Lord for his service to the land of Hellig Brann.

More often than not, he's called "Bear" on the field and in his personal life.

Initiate to Dragons of the Rune. Taken as an initiate by Theron at the 2016 Dragon Creek campout event.

Founding member of crafting household "The House of Ash", Which takes its name and pride from the revival of Hellig Brann.