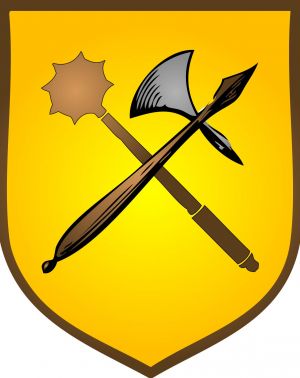 A brown mace and axe crossed on an orange field: a common heraldry for Barbarians

Barbarian is a core class that overwhelms the opponent with brute force.

The Chinese, from ancient periods onward, have considered everyone else to be barbarians, and oddly enough it is the Eastern tradition from India to China that gives us the image of civilization defending itself against the nomadic hordes of such peoples as the Tartars, White Huns, Seljuk Turks, and other steppe tribes.

It is said that the class originated by the late Grimbold of the Burning Lands.