A barony is an Amtgard chapter larger than a shire, but smaller than a Duchy. A barony must hold an average attendance of 15-20 people during a six month period in order to retain its status. 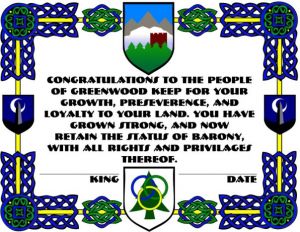 Elevation of Greenwood Keep to the status of barony, created by Alona Twotrees

The elected leader of a Barony is a Baron, or the feminine Baroness. Other offices that may or may not be filled due to the needs of the park are Regent, Prime Minister (or Chancellor), and Champion. Most of these offices are elected, sometimes with the exception of the Champion, who can be chosen by right of arms.

In most places candidates declare and then a quals is held. Qualifying candidates are then voted on by either the dues paid populous or all in attendance, depending on the rules of the park. Some kingdoms do not require baronies to hold a qual for office.

Baronies that meet their kingdom's requirements (usually 30-40 people a week for six months) can be elevated to a duchy.