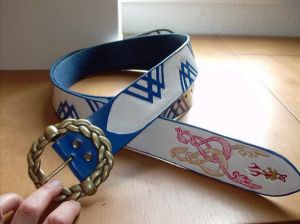 Knight's belt made by Casca for Randall

A belt is a long piece of flexible material worn around the waist, used to support other articles of clothing. In Amtgard, belts are often used as symbols of status, or to serve as a place to hang pouches and belt flags on the person.

Belt can also be used as a verb, where it means "to bestow a belt, in the context of a knighting ceremony" or "to accept a squire, page, or Man-At-Arms belt.".

Belts have been documented for male clothing since the Bronze Age. Both genders used them off and on, depending on the current fashion.

"Accept this white belt, symbolizing the purity of your honor, the sign of the Order of Chivalry, and of your knightly rank and station." 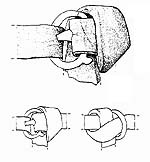 How to tie a medieval belt

Belts are used both to keep your pants up and your tunic down.

In the Kingdom of Neverwinter, it was once traditional for Men at Arms to wear green belts, but these have been phased out and replaced by the black belts of the rest of the Amtgard world.

Sometimes, the word belt is used to denoted a rise in the order such as in relation to knighthood, in terms such as "four-belted knight", meaning a knight who has earned all four orders of knighthood. It can also signify a knighthood, as in "He received his belt in 2003". The same is true or squire or page. It is also a possibility that a belt might denote household or company affiliation; many companies and households wear woven belts incorporating colors from their heraldry.

Belts are often adorned by belt favors, pouches, sword frogs and other items.

Some households and companies bestow a particularly colored belt as a symbol of membership. Some examples of this are:

The two most common materials for belts are leather and macrame cord.