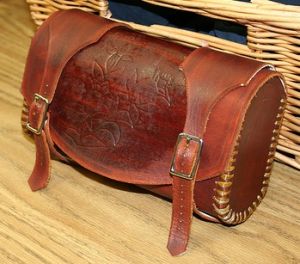 Stiff buckled pouch made by Leila of Astral Winds

A belt pouch is a purse worn on the belt, typically made of sturdy cloth or leather. A pouch is technically a small bag closed with a drawstring, but is often used to refer to a coin purse, or purse used by a man.

Pockets have only recently come into fashion. Before that a purse attached to your belt, or tucked into your sleeve, was the only way to keep personal belongings secured. The first appearance of such a bag is on Egyptian murals, which show pouches worn around the waist. Every society has had a form of pouch, from the Greeks to the Mongols to native and aboriginal peoples all over the world. Different styles of bags were used for different purposes, such as falconry bags for holding treats for hunting birds. Pouches were sometimes worn under the skirt and were accessed through a slit in the upper garments. 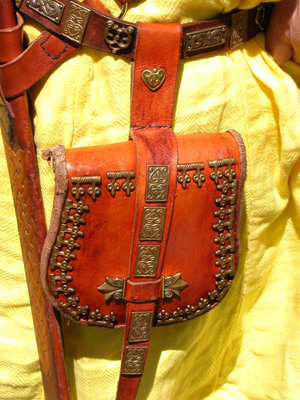 Both men and women wore purses. They were often finely embroidered or ornamented with gold. Pouches often showed social status based on the embroidery and quality of the bag. The purses worn by women mainly attached to their girdle. It was also customary for men to give their new brides purses embroidered with an illustration of a love story. 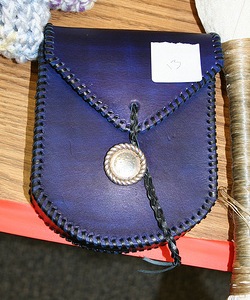 As trousers of the Middle Ages don't traditionally contain pockets, pouches are imperative for keeping track of personal items. Events will often give out trinkets, quest tokens, or totems. Many kingdoms and chapters have a local currency, which is often represented by small coins. With two hands usually being filled with weapons and shields, pouches are a must.

There are a number of different types of pouches common in Amtgard, including (but not limited to):