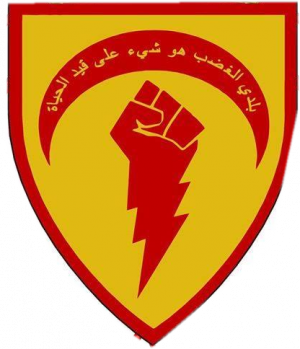 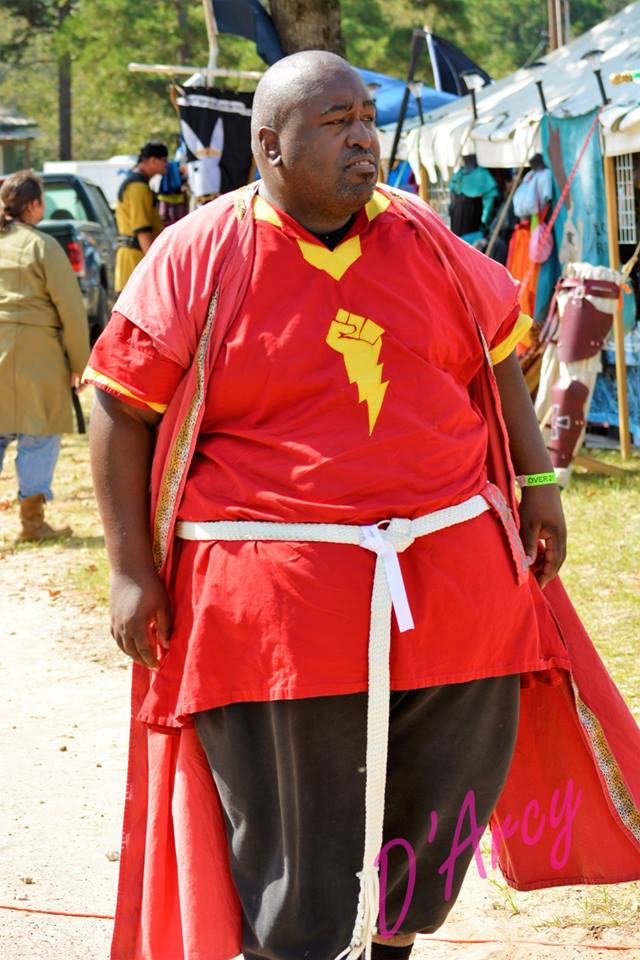 Bloodmoon started playing Amtgard in 1989, in what was then the Barony of Ironcloud. One of the historic group's founding members, he has been present at the founding of not only several Ironclouds over the years, but also Mirkwood, Eagleshire and more. Bloodmoon has, in the past, held many kingdom, baronial and shire level positions including Regent of Ironcloud, Prince Regent of the Emerald Hills, Baron of Mirkwood and numerous guildmaster positions. Bloodmoon's greatest personal achievements would be in both war and peace. First, he would lead the mythical Barbarian Horde against the Celestial Kingdom in the War of Kings under King Arn and second, receive his Masterhood of the Rose from Sir Clu for his feasting skills.

The man we call Bloodmoon was born En’tegan Pusa of the Clan Pusa, of the Warrior caste of Artenia some 60 Oltas (74 human years) ago. The ninth of sixteen children, he was destined by birth to an unremarkable life as a sentry captain or quartermaster, thanks to his position in the family. But Destiny, as it would, often shined upon young Bloodmoon.

In the Olta of Ka’non, on the fifth day of the Burning Season, a strange ship would appear in the harbor. The reclusive Art’n had never seen a human, let alone one of their oddly shaped ships. The human captain, Gavvin Quinn, had "discovered" (his words, not the Artenians') a strange lands of giants, who possessed strange crystals, plants and metals for which he sorely wished to trade. The Art’n would have none of this - to them, their resources were sacred gifts from the gods, to be used only by them and their valued allies.

Gavvin swore he would be an ally, and in order to prove it, he would take an envoy of Artenians to his homeland, Ironcloud, as ambassadors and prove to them that the humans were worthy of their trust and goods. Bloodmoon, always curious and always looking to prove himself, became the Artenian Ambassador, and along with his niece, Timmian, and an entourage of 60 warriors and servants, traveled to the world of men.

Among the Bral’k (an Art’n word for humans that basically translates into "tiny people who are full of themselves"), Bloodmoon would find many adventures. In Ironcloud, he would help forge a mighty Barony. In the Mirkwood, he would teach a new generation of heroes, and across the Emerald Hills, he would become known as a fierce Barbarian and staunch ally of justice in dark times.

Bloodmoon has in the past used many weapons, all of which are named per Artenian custom.

Bloodmoon brought many exotic animals with him from Artenia

Bloodmoon was inactive for over a decade, many of his awards were lost in the sea of time. However, the word Numerous could easily be used when speaking of their number. 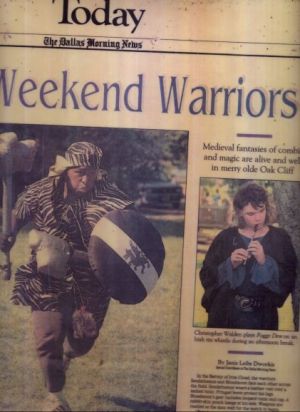