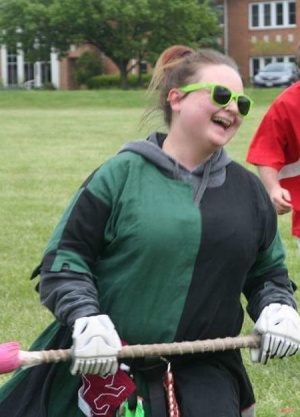 Cannon Tul hails originally from The Duchy of Knoblands in the Kingdom of Tal Dagore. C-Ball started playing in May of 2008 in Knoblands. She has also spent time in The Kingdom of The Rising Winds in Blackfire Pass, In May 2019 Cannon settled in Sylvan Glade in the Kingdom of Winter's Edge. Cannon has a passion for fighting, crafting, service, and leadership. She strives to be a well rounded Amtgarder.

Cannon didn't name herself, her original game name was CannonBall.

Cannon is a member of the House Lioness household.

Cannon is a former Man-at-Arms to Warlord Sir Raven the Swift.

Cannon was dubbed Hype Master by Sir Queball at Keep on the Borderlands 2016.

Cannon has an affinity for Valkyries.

Cannon accepted a squires belt from Dame Roslyn Tul and changed her name to Cannon Tul in June of 2017.