A chapter (also called a park, land, or group) in Amtgard are local groups of Amtgardians, contracted as an official group by Amtgard, Inc. Chapters can belong to a kingdom, or be a freehold. Chapters of Amtgard are found all over the United States and Canada, and occasionally found in other countries around the world. 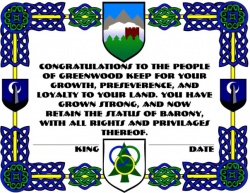 Elevation of Greenwood Keep to the status of barony, created by Alona Twotrees

To qualify as an Amtgard chapter, a group of people must play in the same location at least twice per month, at a regularly scheduled day and time, and hold a contract. They must also create a name for their group that does not match another chapter's name, and design a park heraldry.

Chapters that wish to become a part of a kingdom must speak with a kingdom representative. Parks usually join kingdoms that are geographically close to them, though parks in an Amt-Void might seek to join a kingdom that is hundreds of miles away.

Chapters are given designations based on attendance. Most kingdoms count the number of unique individuals that attend in a given month, while others average number of people who play each week. Chapters can go up and down in status every six months. Parks that never join a kingdom, and therefore choose to remain a freehold, cannot have any designation besides shire. Different designations allow for different executionable privledges, such as the ability to bestow higher level awards.

Each chapter has its own officers, who are responsible for running all aspects of Amtgard play. All parks have a local monarch, who handles the weekly affairs required to maintain a park. If there are enough members, other offices might be created, such as a regent, a prime minister, a champion, or local guildmasters.

Chapters are required to sign up with the ORK, Amtgard's online record keeper. Park officers can use the ORK to keep track of attendance, awards, titles, and other records. If park members visit other chapters or kingdoms, their records will be simultaneously updated and backed up.

The following are chapter designations, used to assign permission to different chapters based on size. The exact number of people required varied depending on which kingdom they belong to. Freeholds are always considered shires, no matter the number of members.

Chapters can only advance in designation with the blessing and consent of their Kingdom Monarch. Each kingdom has different requirements for advancement, which may extend beyond the number of active players.

Multiple chapters are joined together to form a kingdom. You can only be created as a kingdom if you are approved by both your supporting kingdom and the Circle of Monarchs.

Any group considering changing their name must contact Amtgard Inc. to do so. If a group's name changes, their contract is not valid until they can update the contract paperwork.