Combat is at the core of the game of Amtgard and represents a significant portion of the time spent at Parks each week. 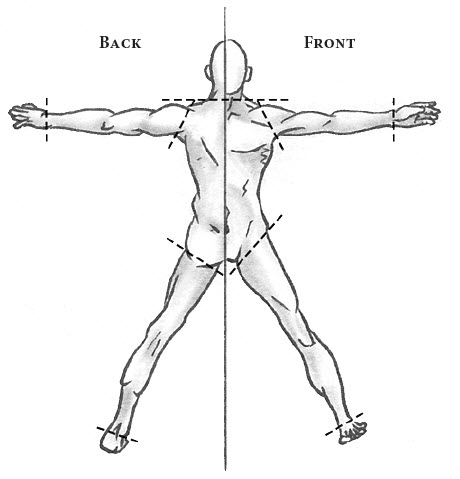 Torso: Everything that isn’t an arm or leg, including the groin, shoulders, and collar bones up to the vertical rise of the neck.

A broad range of contact is allowed in combat. The rules below outline what is and is not acceptable. No action is acceptable if it is performed in an unsafe manner. The responsibility for the results of an action always rests squarely on the the actor. Unsafe behavior on the field can result in suspension from play at the discretion of the Champion, Monarch, or Guildmaster of Reeves.

The following actions are acceptable.

The following actions are unacceptable. Some amount of incidental contact is expected in a contact sport but repeated or egregious offenses will result in suspension.

Wounds may be inflicted by contacting a Hit Location with the Strike-Legal portion of a Weapon. Shots from Melee Weapons fall into two broad categories:

Some contacts which partially fulfill the above criteria are listed here as examples of invalid shots.

Any two Wounds, or a Wound to the Torso, results in a Death.

Miscellaneous rules necessary for the smooth operation of combat.

Combat is fast-paced and highly competitive. In order to minimize misunderstandings and confusion on the field it is important to observe the following rules.