"Out of the night that covers me
Black as the pit from pole to pole
I thank whatever gods may be
For my unconquerable soul.

In the fell clutch of circumstance
I have not winced nor cried aloud
Under the bludgeoning of chance
My head is bloody but unbowed.

Beyond this place of wrath and tears
Looms but the horror of the shade
And yet the menace of the years
Finds, and shall find me, unafraid.

It matters not how straight the gait,
How charged with punishments the scroll,
I am the master of my fate,
I am the captain of my soul." 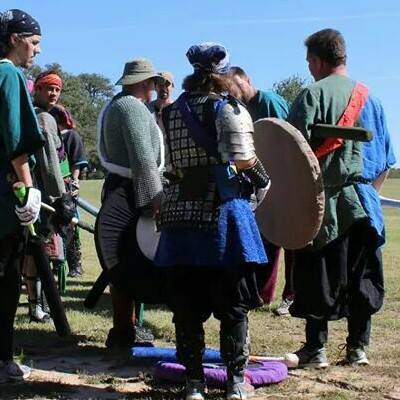 A fearsome warrior, Corsy rose from the ranks of the filthy masses to become a member of the Duchy of Granite Spyre in the summer of 2013. Quickly demonstrating her skill and enjoyment of conquering her foes, she climbed the ladder of leadership and has now been crowned the regent of the Duchy. Of humble and unassuming nature, her enemies are often fooled into underestimating her fierce attacks.

Only halfway through her reign as regent, tragedy struck and the Duke turned Baron of Granite Spyre was called away to fill a grander position. Left floundering in the wake of his leaving, the regent was forced to assume the role of Baroness. The current King of their Kingdom, having also been hit by a large object that traveled and was capable of carrying many people, shared a camaraderie over the loss of their intended positions as regent.

In October of 2014 Corsy visited the Kingdom of the Emerald Hills for World Bummerwars XIV, where she was invited by the Green Dragons to join their ranks and happily accepted.

After a successful term as Baroness, Corsy enjoyed her freedom to mingle with the people for a time before fate forced her to part ways with her home. She found herself pulled to a different kingdom in January of 2015, that of the Emerald Hills, where she found a new home in the Barony of Bright Forge. Eventually she made her way to join her fighting company, the Green Dragons, at Eagleshire every Sunday.

Clearly a glutton for punishment, Corsy ran for and was elected Prime Minister of the Barony of Eagleshire in 2017 and was awarded the title of Esquire for a relatively successful term of service.