Once Known as Sir Castings Spellflinger 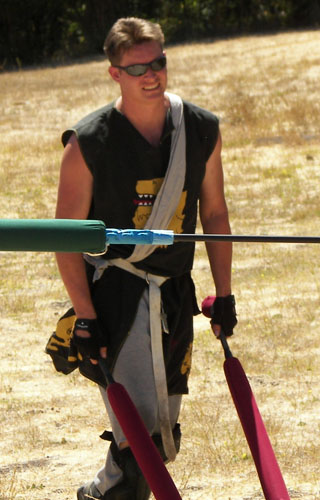 Born to the spirits of sea and woods, the tall and handsome Creampuff had a life of little work, and all play. He enjoyed writing the most awful poetry that he sung to all maidens willing to listen (and some that weren't but where caught by his Aragorn smile and roughed looks). Though his poetry was bad, he was handsome enough to be called beautiful.

After frolicking through the glittering sand dunes Creampuff saw the beautiful, but sharp tongued, Ailanthus. Realizing that this was the woman of his mind's eye he set his sight on her, though she was much to good for him. She had seen and heard of his wooing of all the women in the land, and she would not have him, but he had a plan.

Becoming an honest man, and getting a gentlemanly shearing, Creampuff began to learn the ways of man. He began to learn to craft and what it was like to earn things through honest work, and not just a smile. He won the respect of his small local land, Wavehave, and earned the noble title of Lord. A year later however his dashing smile stirred the loins of the local Duke and he was henceforth known as Lady.

This humbling experience made the fair Ailanthus laugh, and Lady Creampuff kept her laughing till she realized she was down an aisle and marrying the pain in the ass.