Sir Baron Darva Oakstake, Esquire. of the Bitter Coast of the Kingdom of Goldenvale.

"Talk all you want. Then we'll see who's standing when this is over." 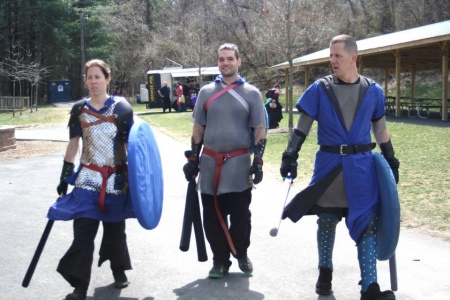 Starting Amtgard in January 1992 in Shadowvale (in New Mexico) at the age of 13, Darva has moved all over the country-to groups in California, Florida, Texas, Virginia, and Maryland. In 1998, he helped form Greymyst in Maryland, then joined that group with the preexisting Eastport in Virginia. In 2000, he formed Solstice in Maryland. After moving back to Virginia, joined with the Sea of Rhye, and formed Giant's Dance. Moving back up to Maryland, he helped form the Bitter Coast.

Born in the deep Underdark of the western lands, Darva was the product of cruel Deep Dweller Elf breeding programs. His father, a Sylvan Elf ranger, was captured during a bloody campaign by the Deep Dwellers and given over to the matriarchal priestesses of the Deep Dwellers. The high priestess was experimenting on creating a group of warriors who could battle the light dwellers on their own terms without the characteristic light weakness of the Underdark citizens. After his birth, Darva was immediately taken from his mother and subjected to countless unnamed tortures to harden him. When he was able to hold a weapon, he was trained in the ways of assassins. Darva used these skills to great effect when he escaped captivity and fled into the human cities. From there he waged a private war upon his extended family. His hatred of the Deep Dwellers knew no bounds. After a time, he moved on to travel the various kingdoms of Amtgard. Quick to take vengeance, he earned a name as an effective and devastating assassin. During one particular job, he found himself in an ambush by several bounty hunters-among them was a wizard. His Deep Dweller blood awakened and their innate magic coursed through his body. He summoned fire to burn his foes, and used dark words of power to take the life from their bodies. Searching the bodies, Darva found a bounty for him posted by the local Deep Dwellers and a book of magic upon the wizard's corpse. Studying the spell book, Darva made his way east. There he found a sprawling city-an ancient Elven capital. He made his way into the city and worked his way into the undercity. There he made a name for himself as the top assassin in the area-no mark was beyond his reach. Many years later, a Dark Lord from the north raised an army of Orcs and other monsters and marched upon the Elven city. A great siege was formed around the city, but the Elven defenses were much to strong for the attackers to breech the wall fortress. While in the royal palace stalking a mark, Darva witnesses a hidden group of demons summoned by the Dark Lord overtake the Queen and her court. They imprisoned the royal family and took their form. Then, they went below the city and threw open the gates to the Underdark, where the armies of the Deep Dwellers-in league with the Dark Lord, lay in wait. They surged into the city and attacked from within. The city was thrown into chaos as all who sided with the Elves were slaughtered. The remaining defenders, knowing their lives were forfeit, cast a powerful spell which prevented the Dark Lord from entering the walls of the city. In his rage of a lost prize, he cursed the land, which was then renamed the Dark City. Darva fled to a local town to escape the carnage. There, he was contacted by an unknown employer and hired to track down the royal party. Darva was chosen to lead a group of assassins to take down the demons masquerading as the Queen and her court, and retrieve the necklace carried by her human courtesan which contained the soul of the real Queen. The group ambushed the "Queen" on her way to the northern kingdoms on a "diplomatic" mission to gain help against the Dark Lord (really a ploy to draw the human armies into a trap). The battle was quick and fierce. In the end, the demons all lay dead. Darva confronted the human courtesan, and quickly subdued her. He moved to take the necklace, but Fate intervened. A group of hunters was nearby and heard the battle. They quickly came to the rescue and drove off the assassins. Darva was forced to flee against their onslaught. The hunters took the courtesan to the human courts, and with her the necklace. Darva moved back to the Dark City to plumb the depths of the ruins for treasure and hidden lore. There he met a cursed Sylvan Elf named Banshee. She was one of the local druids who had defied the Dark Lord, so he cursed her to be one of the undead. Together the two adventured together. Over time, Darva started to feel the call of his Sylvan blood and, with Banshee's help, developed his Druidic magic. His time hiding in the wild helped awaken his Scout abilities gained from his father's blood. Over the course of many quests, Banshee was freed of her curse, and took her original name back-Tileri. The two wed and looked for a place to start a family. Together they helped form the free town of Solstice, and it was through his service there that Darva was granted the titles of Lord and Knight of the Flame. Soon, a call for warriors came out, and Darva heeded this call, moving his family south. During his travels, Darva explored both sides of his nature-the good and evil. His dualistic soul was in constant conflict, so he traveled to the far east to learn from the Monks. Coming back to the Dark City area, he joined with a group of mercenaries to form the Bitter Coast-a save haven for those who fight for justice and freedom. He formed the mercenary company, the Ravens, as a righteous arm for the common person. Darva honed his fighting skills, and after winning many tournaments was granted the titles of Warlord and Knight of the Sword. Currently he works hard on bringing the peoples of Amtgard together to form a strong front against the dangers of the world. He continues to fight for the weak and speak out against injustice while teaching the people how to make their own place in the world. 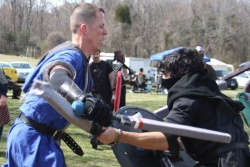 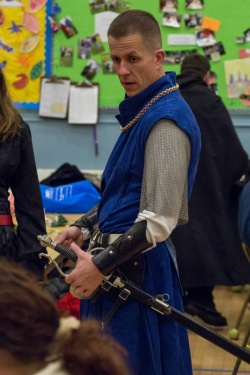 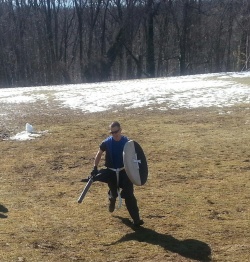