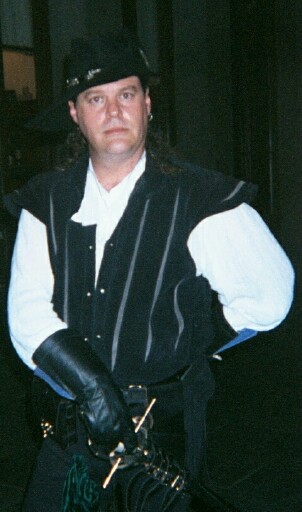 'Interview with Sir Nevron of the Emerald Hills' In which he gives Delphos mad props.

TED4EH asks: What was it about the Freehills, now Kingdom of the Emerald Hills, that attracted you to show up and help develop amtgard here with Delphos back in 88?

First off, I'm glad to see you included Delphos in the above question. He deserves a lot more credit/respect over the creation of our Kingdom then he ever gets or is willing to admit. As for me, I enjoyed the few times I spent on the field in El Paso, and I thought it would be cool to be able to do the same thing up here. When I first met a lot of the old Freehills crowd it was in the form of some sort of party out at Reyna's place or something like that. Just prior to all that, Delphos and I had went to a SCA Feast thing in Carrollton looking to hook up with Reyna and we were made to feel most unwelcomed because in our innocence we proclaimed to be membersof the Freehills. That statement was followed with a wave of unrest and for the rest of the evening I wasn't having much fun. Its a wonder I ever stuck with it. But as I said before, Delphos was a big reason for me to continue. We really got lucky when it comes to starting off with a sizeable group from day one. Our 1st day had 13 people. And that doubled the next week. I remember having weeks of 50+ people attending the park on normal sign-in days. You got to remember that in the begining I was a diehard stick jock and in some ways I still am. I fell in love with the rush of the combat. But I have learned that the club needs more then a trench. I don't, but the club does.