”Hit Hard, Hit Fast, Kill Everything, if you dont die on your feet I'll skull f*@K your eyeballs into mush!!”- Leshil Ful An Mactire 2014

"Fight em as a pack, do em from the back!"- Leshil Ful An MacTire

I AM A BEAST PURE INSTINCT AND INTELLIGENCE. I AM PREDATOR NOT PREY AND SHALL CONDUCT MYSELF AS SUCH. I SHALL BELIEVE NOTHING THAT IS NOT WITHIN MY REASONING. I SHALL ALWAYS STRIVE TO PRESERVE MYSELF AND MY PACK. I WILL NOT BETRAY MY KIND NO MATTER WHAT BENEFIT I MAY GAIN. I SHALL KNOW, I SHALL WILL, I SHALL DARE, AND I SHALL REMAIN SILENT. I AM ONE WHO SHALL BOW BEFORE NONE. I AM ONE WHO WILL NOT SUBMIT. I AM ONE WHO SHALL NEVER BE DEFEATED. I AM HE THAT STANDS AGAINST ALL ODDS AND LIVES TO LAUGH LAST. THROW ME TO THE WOLVES, I’LL RETURN LEADING THE PACK! DOG SOLDIERS OF CUCHULAINN.

The world of Amtgard, aflame in the heat of battle, was driving its self to the point of political and physical ruin. The four winds came together to discuss a solution to stop the destruction of the universe. Devising a plan the four winds drew their powers together in a tapestry of magic and dream, tearing a hole in the vale of the multi-planar universe, searching for the the strongest warriors of the planes. Of the fiercest warriors, only two stood above all others. Hailing from the emerald isles, CuChullainn, who stood in the face of many, and stalwartly defended his home through the ages, in a fury of blood-lust holding his vigil against countless foes from across the seas. On the other side of the seas stood Porcupine Bear. Gazing across from a post of his own, high in the grasslands beyond the mountains, he gathered together the sick, the weak, and the hopeless from across the lands of Little Rain. Despite disease and crippling losses, his band of warriors held the line against all enemies who would assault their homes and ravage their people. Instilling the highest of virtues and honour and selfless service, these two warriors brought together the greatest defenders from across time and space to form the DOG SOLDIERS OF CUCHULAINN. A force that holds the ideals of Honour, Respect, Loyalty, and Selfless Service as the foremost virtues of truth and life.

Ever vigilant in their search for others, the Dog Soldiers ride forever and throughout the war-torn lands of Amtgard, looking for new members to join them in the fight for the defence of the peoples of Amtgard.

Formed: August 1st 2012
Originated: Darkmoon Colorado Springs, CO. Moved to Mists of the Dawn September 2012, Minnesota, Principality of Polaris and temporarily disbanded. During its term of rebuilding the company was based out of Ethereal Tides, Rochester MN, Kingdom of Polaris.

The Dog Soldiers of CuChulainn have now grown across 4 states and 2 kingdoms. The company National Chapter residing in Kingdom of Polaris Minnesota.

Currently looking to expand and create new chapters throughout the whole of Amtgard.

Easily distinguishable by their company uniform modeled after a Motorcycle Club (MC) vest (cut) in camouflage with a 3 piece patch set on the back with a paw patched center. The only "Cut Company" in Polaris, and possibly the only one in existence in Amtgard

During the Minnesota Amtgard May Event (M.A.M.E.) 2019, five members of Einerjar (the sister company of the Dog Soldiers) were awarded the privilege of their own vest (Cut) in Einerjar patches and colors, as well as the honorific title of Kennel Guardians for their assistance in the growth and prosperity of the Dog Soldier growth over the years.

Shaft of Mists of the Dawn- Einerjar Kennel Guardian 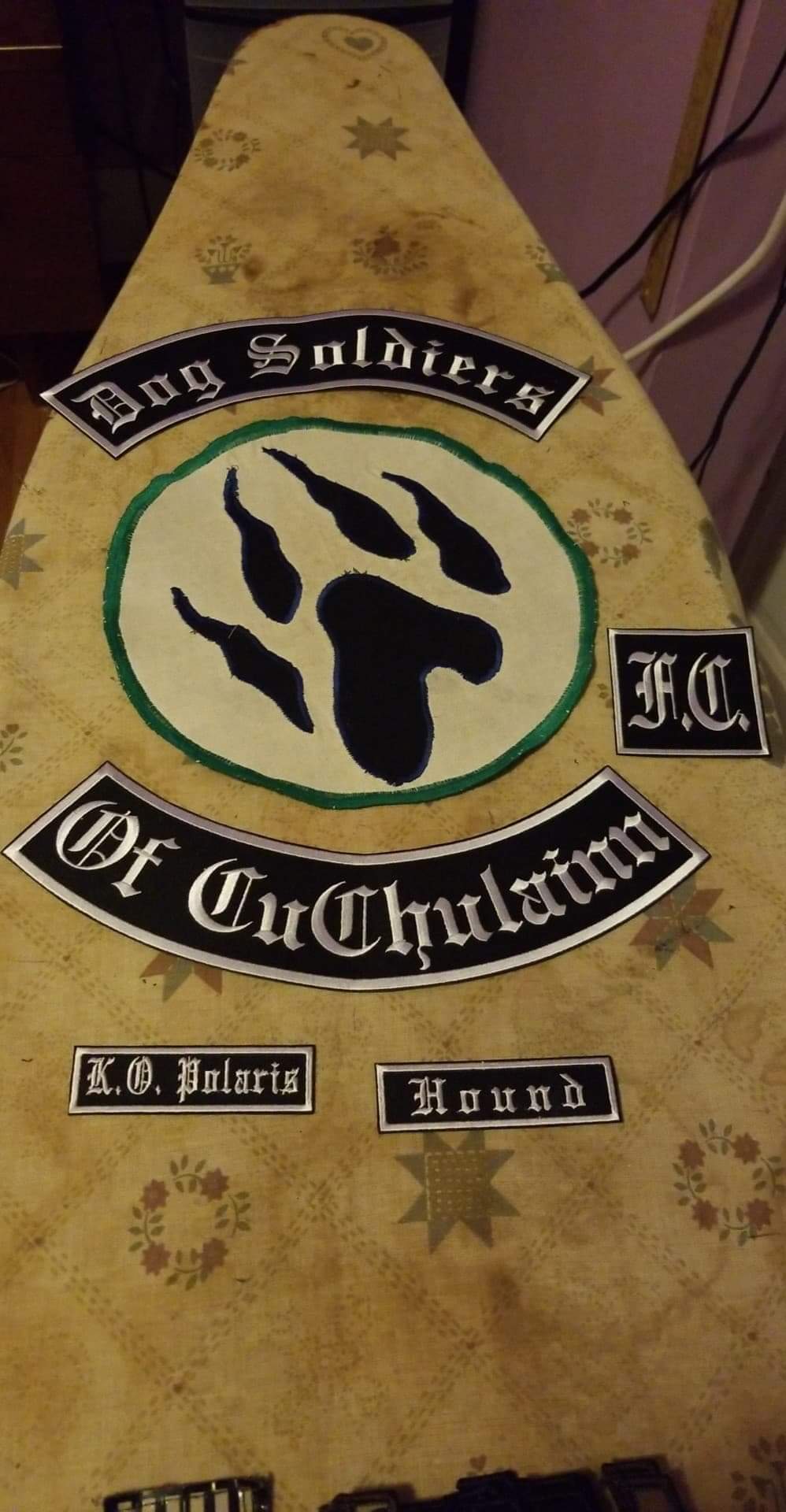 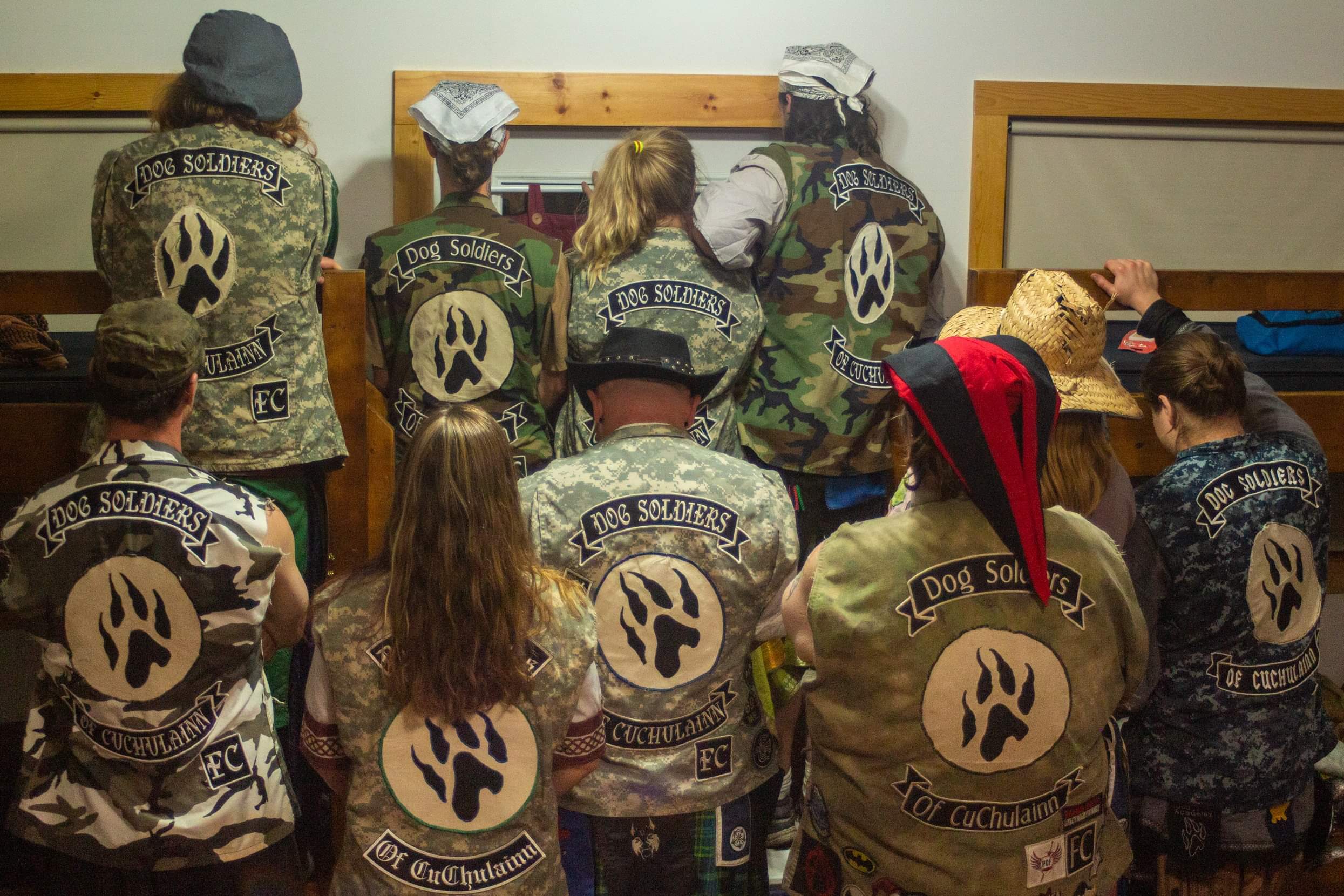