a Duchy of Winter's Edge , located in Clarksville, Tennessee. 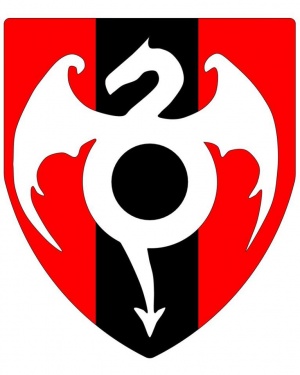 Dragons Hollow was originally a gathering of older members from the defunct groups of Crimson Stag and Silver Acorn. We met in front of the University center at Austin Peay State University. When I joined at the end of 2007, they were not considered an official group of Amtgard. Thus began the application process that myself and Katar Sitan completed. The design of the original heraldry, as well as the name, went through many trial and errors before we settled. We became a freehold in 2008 and within a year, a part of the Kingdom of Neverwinter.

During the first few years of being a shire, keeping the numbers up in a military/college town was hard. Since the numbers fluctuated so much with the school and military schedules, we were unable to keep a stable number of members. Became a part of the Principality of Winter's Edge under Neverwinter as of December 2008. Eventually we moved to Rotary Park where it held numbers just under barony. With the move to Liberty Park in 2012, it was were able to keep numbers above barony status and became a barony by the hand of the Neverwinter Crown. At the end of February 2016 Dragon's Hollow submitted a packet to be elevated to Duchy which was accepted and announce the weekend of Winter's Edge quals (March 5, 2016).

We meet at Liberty, Billy Dunlop, or Rotary Park(1190 cumberland dr clarksville tn 37040), every Sunday at noon. Please check the Facebook group for updated info. Park changes are announced at least 2 weeks ahead of time.