A defunct chapter of the Principality of Westmarch under Dragonspine, located in East Pasadena, California. 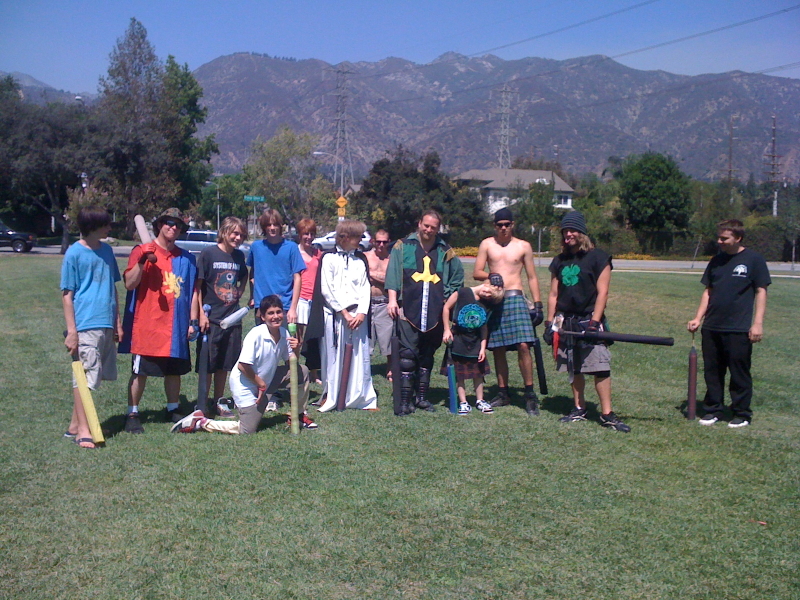 The chapter's Grand Opening Session. We had 15 on the field that day, including 8 very welcome visitors from Siar Geata to the South.

The story of Eldritch Hills began in late May 2009, when two experienced Los Angeles-based players from Crimson Sanctum decided to expand Amtgard’s small presence in the region by forming a second chapter there.

Uranaga and Morrza, the founders of the chapter. Uranaga originally played in Crimson Sanctum; Morrza came from Dragonspine in New Mexico and played at CS for her first year in California, which is where the two met. With them is Staccatto, the Inland Ocean player whose support was crucial to the group’s founding.

Over the next few weeks, they and a friend from Inland Ocean plotted the new chapter’s future, all with an eye toward growing in a manner that would not impact the existing LA chapter. They chose a name that would appeal to different players, a different topography of field, and a session time designed to complement rather than compete. They made phone calls and recruited friends. The process culminated on August 6, 2009, when contracts were finally sent to Burning Lands and Dragonspine.

On August 7, 2009, a mere nine hours after the contract was sent, Kurse of the Burning Lands returned an official contract, launching the chapter’s official life with the words “Here is the validated and approved contract for Eldritch Hills. Thanks and good luck.”

On August 8, 2009, the chapter was officially announced at Southern Rebellion to strong enthusiasm. A tongue-in-cheek nickname, chosen by Staccatto to play off the chapter’s heraldry, also became the group’s new rallying cry, as the announcement was greeted with crises of “Twig on Hill”! Later that night, Lothar agreed to join the nascent group as its new champion, thus completing the officer slots.

Over the remainder of that month, the group began holding evening fighter practices to build word of mouth in the area, and later in the month began to supplement this with local advertising.

On August 30 and September 6, the chapter held its Grand Opening Sessions, attracting 15 players to each, including visitors from [[Siar Geata[[ in Escondido, Silver Sun in Santa Barbara, and other lands.

On September 9, the chapter was informed by the Principality of Westmarch that it had been accepted as a sponsored land.

On September 21, the chapter was informed by the Kingdom of Dragonspine that it had been accepted as a sponsored land.

The chapter is currently looking forward to celebrating its new status at Feast of Mars.

For a list of historical monarchies, please refer here.

Elditch Hills enjoys an active and diverse membership. The chapter’s current active roster is as follows:

For more information, please contact Uranaga or Morrzaby by e-mail