n. A large gathering of Amtgardians, often from different chapters or kingdoms. 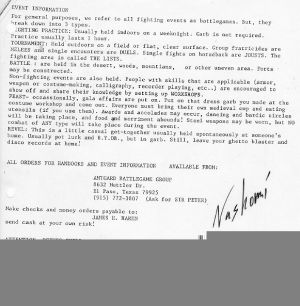 Event information from the 1.0 rulebook.

Events are often held during an entire weekend at a campground, and usually include the full spectrum of Amtgard activities, such as Battlegames, Quests, Arts and Sciences, Tourneys, demos, trips, revels, fairs, workshops, feasts and court.

Events come in may sorts. Your basic events, the ones you will see every reign, local or Kingdom are (in order);

Each of these events should be described along with their recommended timing in your corpora. It is crucial to be aware of your groups rules about these events, if they are not held on time you will face a grumpy populace and a grumpier Kingdom Monarchy. Sometimes an Election or event might not be considered valid if it is held at the wrong time. Check your Kingdom's Calender before scheduling, as you will have more luck getting a higher attendance if you avoid overlapping other nearby events.

Interkingdom events are usually larger and attended by Amtgardians from many kingdoms. You can expect a typically IK event to draw more than 200 people. The big four IK events draw at least 400 each with the largest, Spring War, pulling in around six hundered each year. The Big Four are; Banner Wars, Rakis, Spring War, and Clan.

Other Interkingdom Events might not be as large, but are still important. Olympiad, a rotating Tourney, is held in a different location and Kingdom every year. It is usually held in conjunction with another event, like Tri-Kingdom Midreign in 2008 or Clan in 2007. Olympiad is used to determine the finest craftsmen and fighters of the year. There is both an A&S Tourney and A Warskills Tourney; each having a winner the Cultural Olympian and War Olympian respectively. The person placing highest in both tourneys is named the Grand Olympian. Past winners of the title include Keluric, Raphael, Clalibus, and Lily Sumac.

The Gathering of the Clans is the smallest of the big four, but by far the most important. Clan is Amtgard's oldest event, the first one having been held in 1983 at the Sleepy Grass campground in the Sacramento Mountains just east of Alamogordo, New Mexico. In recent years the event was held at the Bonito Lake campground near Ruidoso New Mexico, but has since been moved to Camp of the Tall Pines in Weed,NM. Weather or not the advertisements for the event reach your ears you can almost always be assured that it will occur on the third weekend of July, just as the summer heat peaks.

Historically the Burning Lands issued a newsletter at clan, called the Tales of the Burning Lands. It often contained factual and humorous information about popular or infamous figures. Bolt and Aramithris being popular targets. The 'Tales' were often the only way to keep informed about other chapters in the days before the internet.

Each summer the Circle of Monarchs meets at clan, to talk about updates and revisions to the Rulebook and the fate of groups which seek Kingdom status. It offers the most varied cross section of people from all over the Amtgard world.

See AmtgardHistory for a list of yearly events. or check out the listing of Upcoming Events.