"Feral is the least of our problems." - Luke

"Mostly we just keep him around for the funny hats though."-Sraw 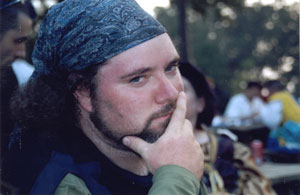 Serpent Knight from the Kingdom of Dragonspine. Currently living in the Wetlands. He has been King of both kingdoms but not at the same time. He is the Lt/Bard of the Sterling Dogs and is the lead singer for 4 Bard Harmony, a bardic band that has played shows at Spring War and Wetlands events. He is known for his bardic performances, and frequently performs with The Horsemen of the Bardic Apocolypse in the Emerald Hills. Feral created and maintained Finkorama, Amtgard's web comic, for 4 years, with assistance from Snicker before having to close it down due to lack of time and threats from in the man in the box. Feral has posted that a new version of the Fink will be coming soon. Feral leads the White-hearted army of doom in a constant bid to doom good times that the SSA and it's leader Slyddur are having. Frequently the two leaders can be seen parlaying by sharing a drink or eight and debating Jynx Mercades' masculanity.