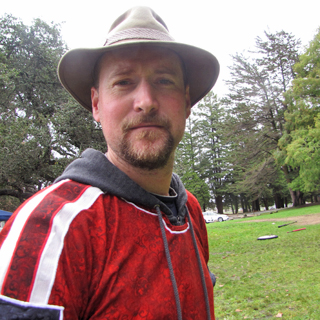 Fiks being all "wtf are you doing" while Autocrating Westmarch's Crown Quals at Wavehaven. October 15, 2016.

“What team am I on??”—Numerous times during ditching...

“We've got a big mess to clean up, gentlemen!”—To his Regent and Champion upon stepping up to office of Duke.

Brought out to Wavehaven for the first time way back when (1997), the young Fiks (known as Torran back then) was quickly dominated by the very aggressive pike and mace heavy field and fled back to the safety of his computer after a few weeks out. There was blood and tears involved.

Skip ahead five-plus years, Torran became Fiks, and Fiks made his reappearance during the hay-day of Sanctuary Hill. Given a floofy garb by his friends, a bow from his father, an end of arrows built with help from another friend and a pair of cheap swords, he proceeded to relearn the finer arts of not dying like a total and complete newb. Flailing wildly; he learned sword-play, archery, and Not-Sucking-As-Much. Just when his interest was winding up, someone broke into his car and stole most of his gear. He found himself so over it at that point, and quit for a few more years.

Skip ahead to 2007, and Fiks reemerged onto Wavehaven's field; hopefully for good. He still flails a bit wildly at times, but he definitely does Not-Suck-As-Much. His current focus became sword-play, weapon and armor construction, garbing, leadership... and figuring out exactly which team he is currently on.

Since May of 2008, Fiks has been almost continuously serving in office. After a short term as a lame-duck Pro-Tem Regent of Wavehaven, he spent a year and a half as the Prime Minister of the Principality of Westmarch. During that time he helped establish the Principality's reputation for submitting professional audit packages to her parent kingdom of Dragonspine using his schooling in web and print design. After the extended nine-month term and a standard six-month term, Fiks stepped down from the Principality level, receiving the title of Lord, only to fill the office of Prime Minister of the Duchy of Wavehaven immediately. He brought his attention to detail and publishing skills to bear on the Duchy's paperwork, demonstrating in words and graphics the pride and experience the Duchy possessed. He served three terms in office before finally handing the reins over to MaA CJ.

Fiks had little time for rest though. After urging from Baronet Squire Laoric Stark, then Duke of Wavehaven, he pursued the office of Monarch of Wavehaven. Just before stepping up at Darkshore XIV, Fiks was presented the title of Baron by Duke Laoric before stepping down from office. Taking up both the coronet of Baron and crown of Duke of Wavehaven, Fiks hopes to reinvigorate the struggling land and return her to being the shining example of Amtgard in California. Easy, right?

Not so much. The land persisted at its usual level of attendance and vigor. Afterwards Fiks refocused on helping the Principality of Westmarch continue its goal of achieving Kingdom status. During the next two years Fiks was instrumental in helping the Principality incorporate as a not-for-profit entity, achieve tax-exempt status with both the state of California and the United States Internal Revenue Service, and submit a Kingdom Bid to the 30th Gathering of the Clans. After a grant from Westmarch and some personal fund raising, he was able to fly into that Clan to witness the voting of the Circle of Monarchs. The successful 15-0 vote for ascension of the Kingdom of Westmarch is definitely the highlight of Fiks' Amtgard career at that point. The original Kingdom Scroll for Westmarch hangs proudly in his home as reward for his efforts.

In the four years since 2013, Fiks has continued to engage in many offices and activities of leadership. He has been a park officer at both Westmarch and Wavehaven several times as well as been President of the Westmarch Board of Directors since 2016, where he lead the Board to a higher standard of excellence in regards to organizing and utilizing the technology available. In May of 2017, Fiks was the Autocrat, assisted by his girlfriend Canara, for the twentieth annual War of the Darkshore. The event, themed after the movie The Labyrinth was a huge success and Fiks even got engaged to Canara at the Masquerade Ball held after Court Saturday night. His great success in the running of Darkshore XX lead to being awarded his Master Rose by Lady Billomina the Nun, Queen of Westmarch while he was trying to get a group organized for a battle game on June 24, 2017.

And so, in recognition for his long career of leadership and time and effort donated to aiding the Kingdom of Westmarch, Emperor Sir Deimos announced January 5, 2018 that Fiks would be elevated by the Kingdom and the Kingdom Circle of Knights to the office of Knight of the Flame at Saturday Court at Darkshore XXI in May, 2018.

On the night of May 12th, 2018, our beloved Fiks was elevated to the office of Knight of the Flame.

A lover of tasty brewed beverages, Fiks has tried his hand at making several brews: