"Freya is the Sterilizer. Her shots end noble lineages, and her presence actively reduces fertility rates in her opponents." -Bann Squire Amdair Lassider 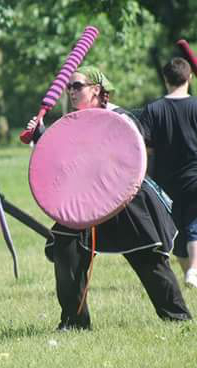 Freya started playing Amtgard in May 2013, as a member of Valley of the Twin Rivers, Rising Winds.

After 2 months she took the office of Regent (acting Monarch the latter part of the term). She held 2 full terms in this office. In this time, she helped to elevate VTR to Duchy and helped coordinate a small, single day event called Snowmagedon in 2014. This was followed shortly, by a spell of semi- inactivity until February, 2016.

In March, 2016 she became Page to Master Squire Kavik.

In June, 2016, joined Temple of the Vanguard, who won Keep on the Borderlands 2016, by a combined effort with Sol Invictus.

Moved to Dragon's Tail, Rising Winds; in October, 2016, where she currently resides.

"Have you seen her use a pole arm? What do you do, lift trucks in your spare time?" -Sir Tanath