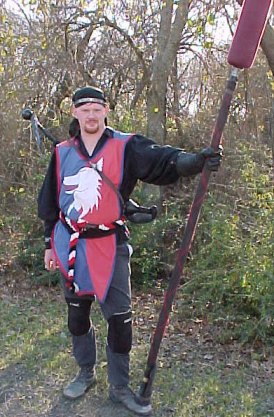 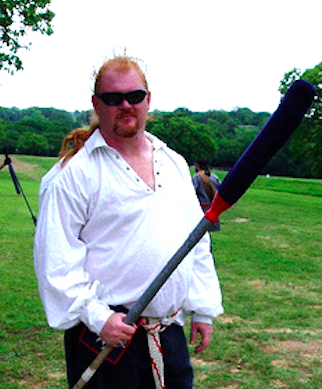 Started playing in April of 1988 at Tanglewood Park and attended the first Coronation of the Emerald Hills. After a short time, Gavvin grew discontent with some of the goings-on at the park and attempted to start the Shire of Krystalstein in Grand Prairie,TX. Krystalstein never really got off the ground and Gavvin was mostly inactive until some friends discovered his weapons in his trunk one day and asked what they were. He gladly showed them how to use them and they asked if there was a place they could do it regularly. From there, the Barony of Ironcloud was born. Gavvin was invested as the first Baron of Ironcloud in November of 1989 by Queen Alessandra.

During his reign as Baron of Ironcloud, the populace grew quickly and attendance of 70+ people was normal by the time Gavvin stepped down as Baron in June of 1990. Due to the fact that Ironcloud had better attendance than Tanglewood, most of the residents of Tanglewood started to play at Ironcloud, which led to many problems. In November of 1990, the populace of the Emerald Hills voted to officially combine the populaces of Ironcloud and Tanglewood and elect a single Monarch to serve the kingdom and do away with Baron. Gavvin ran for King and was elected.

Due to dirty political maneuvering between the former members of Tanglewood and Ironcloud, along with a conflicting mundane job schedule, Gavvin was forced to abdicate his position at midreign. His successor, Lorn, moved the kingdom back to the original Tanglewood park and much of the populace was lost.

Gavvin and most of the Wolfpack then started wandering and played often in the fledgling group of Midnight Sun and many other new start-up parks that came and went. In the summer of 1992, Gavvin was asked to help a new group get started in Rockwall, TX. He took a car full of weapons and rulebooks to meet with a group of high-schoolers and soon Mirkwood was created. Gavvin served as Champion of Mirkwood during the first reign.

One may notice an absence of participation from late 1992 through early 1997. It was during this time, during Operation Desert Storm, that Gavvin chose to serve his country by joining the US Army. While he was at his permanent duty station, he participated in the SCA as a member of the Shire of Al-Sahid in the Kingdom of Caid. After he was honorably discharged from the US Army, he returned home to Amtgard to support the reawakening of Ironcloud.

With the reawaking of Ironcloud came the reawakening of old conflicts between some of the original Ironclouders and the rest of the Emerald Hills. Many of the original Ironclouders favored keeping the new group as a freehold, while Gavvin and some of the newer players favored joining the Emerald Hills. A vote was held (which the dissenters declined to attend) and Ironcloud was once again a part of the kingdom. During the first two reigns, Gavvin served as Guildmaster of Reeves and then as Champion. It was also during this time that Gavvin was named Packleader of the Wolfpack and started to rebuild the once powerful company.

In May 1999, due to an increase in the size of his family, Gavvin moved across the metroplex and became a resident of Mourningwood Glen. Shortly thereafter, Gavvin was raised to the peerage when he was knighted a Knight of the Flame with Sir Tunear, a former packmember doing the honors.

In May of 2002, personal obligations began to take more and more of his time and Gavvin started to make fewer and fewer appearances at MWG and started only showing up at events.

In February of 2007, Gavvin once again became fully active and has spent the last year rebuilding the Wolfpack and helping his squire, Kenta Redhawk, to strengthen Mourningwood Glen, which had almost vanished due to a lack of populace.

May 2008 - MWG is drawing high Barony numbers (despite the Monarchy's ban on its 10+ <14 population fighting) and Wolfpack is flourishing.

Gavvin was squired to the 2nd knight of the Emerald Hills, Sir Landolf Röentgen in 1990. Sir Landolf's belt was called into question a few weeks later as it was determined by the Circle of Knights of the Emerald Hills that he had failed to serve a penance that was set for him. Rather than debate the issue, Sir Landolf dropped his belt permanently. Gavvin never accepted another squire's belt and, although squired for only a few weeks, Sir Gavvin has always referred to Sir Landolf as the head of his belted lineage.