Grand Duke Sir Gilos Dawnhope, of the Lands that Burn

”Are all men of the Burning Lands such complete assholes? No, just me, baby, just me”

aka Ben Passmore, is an important early amtgarder(joined March 1983). He is notable in a number of respects. He was the first Amtgardian to ever be illegally pummeled about the head by Aramithris. His glasses were used to ignite camp fires at the first Gathering of the Clans and his inability to modulate the volume of his voice prior to his 21st birthday allowed him to be an exceptionally effective early Reeve. He was a longtime player in the SWFFL, winning the championship several times with his team, the Passmore Gases.He is the "Ben" in the infamous Edict of Ben's Living Room. Despite his notable lack of personality or looks, he long exerted an almost supernatural magnetism drawing to him many members of the opposite sex (also Ivar Nefarious, a renowned bounder and sexual deviant). In later years, he became a staunch advocate for the census enumerator style of seduction in which he attempted to make sure no one went uncounted. His female companions are infamous, largely unstable, and deadly skillful as marksmen (or -women, they're scary, okay). In 2014, he was a finalist in a Big Foot Hunting Reality Program( http://annapolisgazette.blogspot.com ) on the Discovery Channel. Oh, yeah, he was also Amtgard's first king, a co-author of the first rulebook revision, a defender of the weak and a scholar of some renown. He is categorically not the Purple Duck, period, not, okay maybe he is, ya never know.

Captain of the Far Travellers, Former Member of the Claw Legion, Founder of the Discolored Bird Society.

Gilos Dawnhope was the first King and second Monarch of the Burning Lands (and hence all of Amtgard).

He was knighted long ago on 10/22/83, before the four Orders of Knighthood were split into four categories. 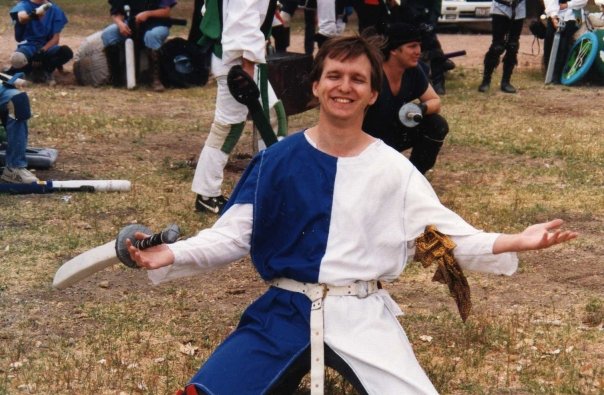