Formed in the Burning Lands in 1983. It is the one of the oldest companies of Amtgard, founded after the Star Questing Dragons and Wandering Unicorns, and before the players at Pompeii (the Claw Legion and Corsairs) formally united with the Burning Lands for a unified Amtgard. The Golden Lions began as the quintessential newbie company, but began to die off in the first few years of Amtgard. Sir Theo Blackflame is credited with reviving the company and is recognized as the founder of the modern Golden Lions. The Golden Lions, along with Annihalus,also founded by Theo, use black and yellow/gold heraldic colors as a result of Theo being a Pittsburgh Steelers fan.

The heraldry of the Golden Lions is Sable, a lions head erased Or, toothed and langued proper. 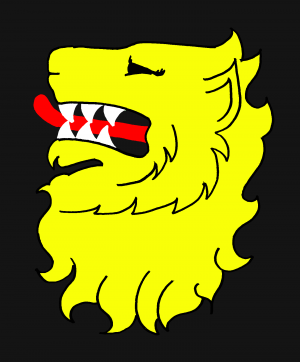 Courage in the face of the enemy.

Honor on the battlefield.

Loyalty to the club.

Pride in the Golden Lions.

More information can be found at http://www.goldenlions.org