"I'm never taking this off" 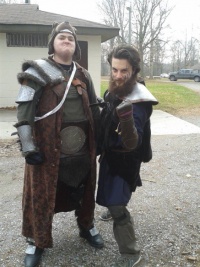 When he was a child, Grimbone went by another name. A name long forgotten. He and his older brother, were orphaned in an accident, which left his brothers mind broken. Grimbone left his home town, with his brother Ash, to look for a cure. They lived together in the forests, Ash hunting, and Grim cooking and building shelter. Years went by, and the two brothers were making a living leading caravans through the dangerous forests, and defending them from what dwell within. A few years later, Grim was leading a caravan of a man named Riktor. He was a horrible man, and he was known for slave trading. A group of bandits appeared, on the road, and attempted to rob Riktor. Not being a brave man, he ordered Grim and Ash to defend him, only children at the time. They turned, and helped the bandits kill Riktor, and set his human cargo free. The brothers travelled with the bandits, to thier base of operations, and stayed with them for years, training in arms and armor, and helping them amass thier riches.

Many years later, Grim and Ash heard rumors that a monestary nearby had a relic of great magical power. They gathered a group of thier bandit brothers under promise of untold riches, and the means to take cities, and they travelled to the Monestary, along with the leader of the bandits, Cutter. When they arrived at the monestary, they found nothing but crops and books. Cutter was furious, so he ordered the monks to be killed, and thier temple razed. Grim and Ash refused to help, and had to fight and kill those they once called family.

When the fighting ceased, many were dead, and the Temple was in ashes. Cutter, who was crushed to death by Ash, no longer lead the bandits, and their whole operation dissolved. Grim apologized to the monks, and promised to help rebuild the temple. It was there he stayed, eventually learning the ways of the monks, and becoming a close friend to all who lived there.

Years again went by, and the brothers helped the community regrow. The temple was rebuilt, thier population grew, and the farms flourished. However, Grim was not a religous man, and decided that his duty had been fullfilled. He packed his things, and left to the sea. The brothers worked as cargo haulers for a small delivery company in a nearby town. They learned all about ships and how to sail them, and were happy for a time. But again, the call of adventure was too great, and one day thier ship was met on the open ocean by pirates. The pirates attempted to take everything, and kill everyone in thier way, but Grim struck a deal. He and his brother would join the pirates, if they spared the lives of the workers, and left them with enough supplies to return home. Being that having a sailor and a strong hand would be a boon, the captain took the offer, and the workers were spared.

After years of living on the ship, "The Grand Disaster" they had finally found a family, and a home. The crew were a bunch of misfits, from all over the world, and they accepted Grim and his brother as thier own. For a long time, they sailed the seas getting into trouble and finding treasure.

When the beloved Captain Lynch fell Ill and died, the crew broke apart. The company left the ship in a secret location, and split up to travel the world. Grim and Ash, along with a few of their comrades, left for Linnagond, a nearby shire, hoping to find work and possibly adventure.