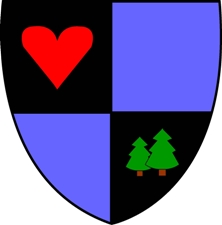 A Defunct freehold founded on September 20, 2004 by Thomas Stonegate in Cameron, Missouri. Thomas formed the small shire so that it might live by the values he was raised with, though he still wishes to find a noble king to could serve and bring the Heartland with him in order to help strengthen that worthy kingdom.

Bold It is with deep regret and disappointment that I'm giving up on tring to keep the heartland alive and active for the time being. I have showed up every week hoping to play and have typically been disappointed. I looked over the last few sign in sheets and realized we have only played about once a month for at least the last 3 months. and only one of those had decent turnout.

I dont want to stop playing but it seems no one else has enough interest or is able to get to the park to play on any kind of regular basis. we may have lost a couple of interested people that wanted to see it before deciding to join recently too. So I'm going to wait and try to find new interested players and start up again when i have at least 10 new potiential players. right now i have 2.''''

I personally dont intend to quit the game completely. I'll likely play with centerpoint when i can and maybe this will motivate me to make it to some real events.

Where to Find Us

The Shire of the Heartland meets Sundays at 3:00pm at Wallace State Park. If you come in the main entrance take your first right just past the gate and go down to the first shelter house.

Beware the Midget Hordes in The Heartland!

Warrior Brendon of the Midget Horde

(NOTE: This Chapter is Defunct and Inactive)