Formally known as the Shire of the Shining Dogs. Located in Portales, NM and founded in 2003 by Jack, these people became a shire of Dragonspine on the field of battle during the War with the Burning Lands in 2004. The groups fields members such as Lord Squire Jynx, Lady Tajsen Quintessa, and others including a yearly flux of new players from the college located in Portales. The Shire was initially co-run with Eastern New Mexico University, but the people of Shining Dog split with the college and became an independently run amtgard group, and left Dragonspine to petition the Kingdom of Golden Plains. Since that time, the populace has changed their name to the Shire of Heaven's Abyss.

This chapter was reborn in January of 2009, the players are as of now chosen a new name, Darkwater. 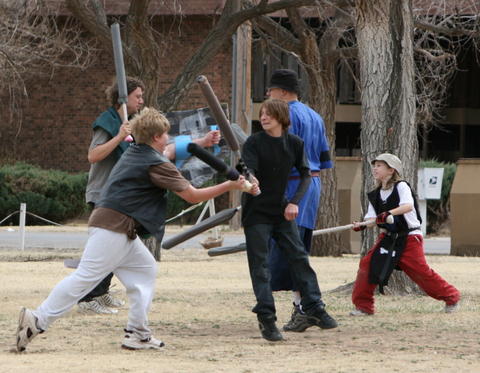 The Shire of Heaven's Abyss is located in Portales, New Mexico. The populace meets every Saturday at 12:00 pm in Rotary Park, located on the corner of 18th and Ave J near Eastern New Mexico University.