Third highest title in the Amtgard Order of Precedence, above Count but below Archduke. Generally awarded for a single term as Kingdom-level Monarch. The proper form of address is "Your Grace", or "His Grace James, Duke of York". If appropriate, "Sir" or the equivalent may be added after "Grace". It is also appropriate to just refer to a noble by their title and estate, like "the Duke of York". In Amtgard players might be officers of a chapter, but also hold a different title. For instance Her Grace, Duchess Corvina Sharpie, Baroness of Falling Fire.

Historically in England Dukes wore crowns decorated with strawberry leaves, a symbol of abundance and health. 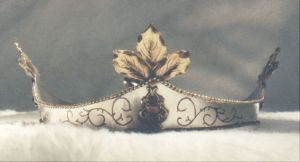 Example of a Dux Coronet with strawberry leaves

A duke is a member of the nobility, historically of highest rank below the monarch, and historically controlling a duchy or a dukedom. The title comes from the Latin Dux Bellorum, which had the sense of "military commander" and was employed by both the Germanic peoples themselves and by the Roman authors covering them to refer to their war leaders.

In the Middle Ages the title signified first among the Germanic monarchies. Dukes were the rulers of the provinces and the superiors of the counts in the cities and later, in the feudal monarchies, the highest-ranking peers of the king. There were, however, variants of these meanings and there were even sovereign princes employing ducal titles.

In the Modern Age it mostly became a nominal rank without an actual principality. The notable exception would be the Grand Duchy of Luxembourg. It is still the highest titular peerage in France, Portugal, Spain, the United Kingdom, and Italy. A woman who holds in her own right the title to such duchy or dukedom, or is the wife of a duke, is normally styled duchess. However, Queen Elizabeth II is known as Duke of Normandy in the Channel Islands and Duke of Lancaster in Lancashire.

In Burgundy and Provence, the titles of patrician and prefect were commonly employed in preference to duke, probably for historical reasons relating to the greater Romanization of those provinces. The titles, however, were basically equivalent.

In late Merovingian Gaul, the mayors of the palace of the Arnulfing clan began to use the title dux et princeps Francorum: "duke and prince of the Franks." In this title, "duke" implied supreme military control of the entire nation (Francorum, the Franks) and it was thus used until the end of the Carolingian dynasty in France in 987.