”You like money AND sex? We should totally hang out...”-Tidus

"Dude, I'm a Dragonmaster? I just started last month! So does that mean I get added to the ORK?"-Hiro Matsuzaka, stated 02/15/2015, after the results of the Burning Lands Dragonmaster results were released. 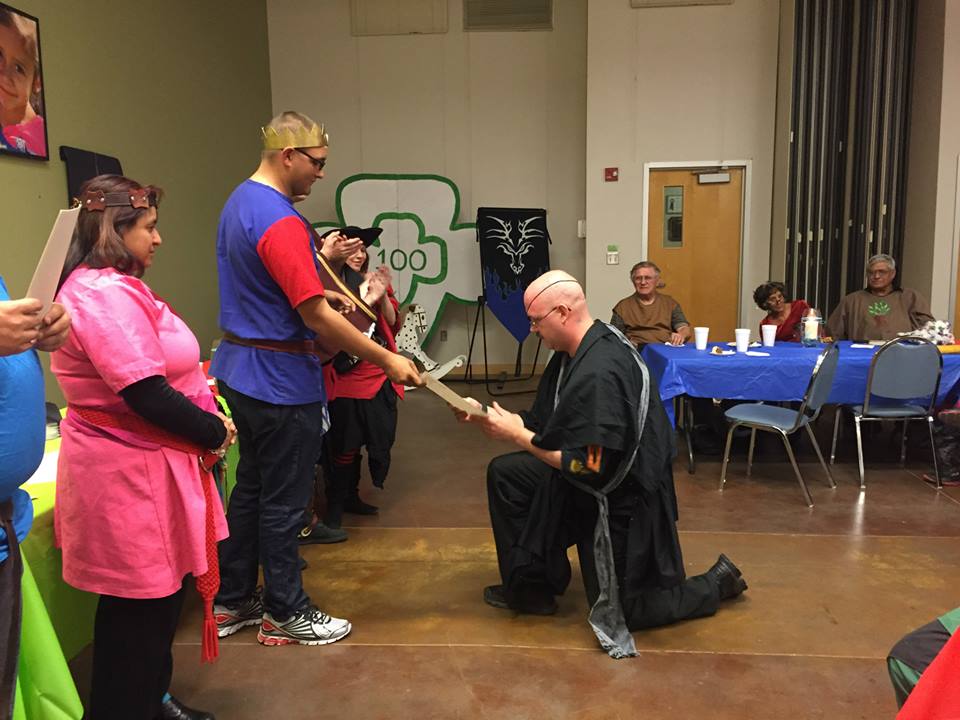 Hiro receiving his Dragonmaster from King Zuryel of the Lands that Burn, as Princess Dru-Kara looks on.

Hiro came to the park initially in March 2014, but got carried away with mundane issues shortly thereafter, keeping him from Amtgard until January 2015, when he became acquainted with Tidus in the mundane world. Both Hiro and Tidus returned to Amtgard at Burning Lands along with Lurker, who had recently moved closer to Burning Lands proper.

Hiro's favorite creative pastimes that is Amtgard related is making and designing new and/or unique weapons (scythe, khopesh, ect.), creating archery games, writing haikus and journal entries, cooking, and writing filks. He won the very first Dragonmaster tournament he entered, while having only 10 credits to his name at the time of his win.

Hiro also enjoys combat. A lot. Like, he's been a martial arts practitioner since the age of 4! And most of his professions mundanely (U.S. Navy, U.S. Army, Security Officer) allow him the opportunity to use those fancy moves on unsuspecting assholes he encounters that are looking for a fight. That does not mean that Hiro is ALWAYS looking for a fight, but he is always ready for one. Hiro also stresses the importance of solid footwork and arm stamina when training with weapons. And he don't mind a little extra weight on his weapons, unlike some folks. But that's because he's buff!

Hiro tends to hit people in the head quite a bit, but not on purpose. Most of the reason why it happens is because of poor eyesight, his fast and aggressive nature in combat, and overall rust. Please do not take it personally, or take it out on him. He already feels bad about it...

Hiro is also a fan of archery. He is constantly thinking of ways to get due credit to exceptional archers in Amtgard after observing the fact that archers are rarely acknowledged in comparison to melee fighters. His goal is to create a system in which characters who use ranged skills all over Amtgard can use to determine individual accuracy skills in various circumstances, with the hopes that the system will be considered when awarding Order of the Warrior to ranged characters outside of the confines of "battlefield prowess", if not outright creating a new order for archers, wizards, and other ranged characters .

Now for the flurby stuff...

Hiro Matsuzaka is a ronin and former captain of the sunken ship Kumiko, which had shipwrecked near the Burning Lands shores. Losing all of his equipment while his ship went down, he was forced to improvise clothing and weapons quickly. He fashioned himself makeshift clothes from the sails of the ship and managed to make some suitable weapons from driftwood on the beach.

Undaunted and prepared, he carried himself into the Burning Lands, where he met, befriended, and joined the duo of Tidus and Lurker, themselves on their own quests.

Hiro, due to injuries sustained during the loss of his ship, to include the loss of his eye, is driven to gain a ship and fight the sea monsters that plague the shores of Burning Lands for a measure of vengeance. Hiro actually abhors violence, though he will engage in violence when his morals and principles are violated (Attempted genocide of Elves, strong-arm oppression of kingdom subjects, ect...)

Hiro will break laws he does not agree with, though usually as a result of said laws violating his personal and/or moral code. He will, however, help those in need, regardless of how trivial it may seem. So his alignment is Chaotic Good.

Hiro has also spoken out about the attempted genocide of elves that Dragonspine has recently attempted to enact, and has refrained from killing King Randall Andalsa VIII of Dragonspine despite several potential opportunities in the past. Hiro is also the current Dragonmaster (February 2015 - Present), and is more than happy to build weapons for Burning Landers to use in the upcoming war. His goal during the war is to assassinate the King of Dragonspine with one of the weapons he has made personally. Whether Hiro wields it or not is a matter of timing and convenience.

Goals of Hiro: Be the best damn weapon-maker, EVAR!!! In the same vein as Hattori Hanzo. And kick ass, but that goes without saying.

Rumors about Hiro (both real and embellished):

Most are unsure if he's an alien or a ghost. Both are plausible, since he tends to disappear without the use of any Insubstantial ability in battle. And he's weird...

Hiro claims to be a human being.

It is rumored that Hiro can speak Braille, along with several other world languages.

Hiro is slightly psychic. Or psychotic. Not sure. "Slightly" being the key word when referring to both terms.

Hiro does not drink, he absorbs.

Hiro may have been hatched.

Rumors have circulated that Hiro's quick ascent to Dragonmaster may have something to do with him being dragon-blooded.

Hiro has no pupils in his eyes, leading some to think that he really is blind.

More to come as rumors continue to pile in...


Writer of the filk My Ankle Hates Me. 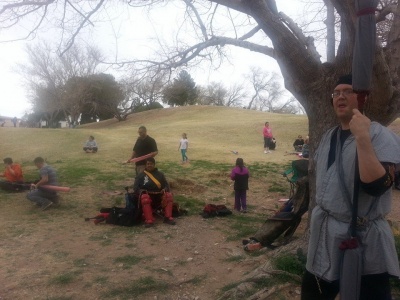