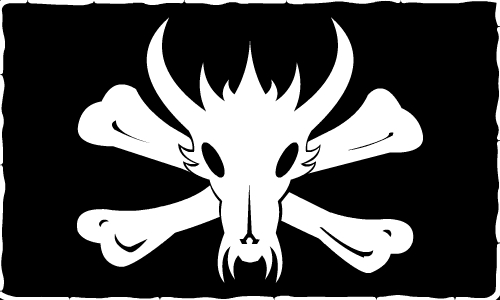 Captain James Hamus started his career in the imperial navy of a long lost city in the sky. His rose quickly through the ranks and was granted his own ship and the title of Captain. During this time, he took Mister Christopher, a young medic, as his First Mate.

Hamus was quickly thrown in the thick of a massive conspiracy wherein his own government was using the enslaved essences of a nearby air elemental community in order to keep their own world afloat. A war was set in motion and the elementals began to assault the city. The government declared that it would send a ship with an arcane explosive into the portal to the elemental's home plane and detonate it in the rift, sealing the portal and ending the war. Captain James Hamus was called upon to be the suicide bomber, though he was not told of this at the time.

As the explosive was lowered onto the main deck, it's magical energies awoke the elemental trapped within the core crystal of his ship, the Solar Flare. It spoke to him and in the days before his mission, Hamus became painfully aware of the truth behind his culture.

On the day of the attack, Hamus made a last minute decision and veered the Solar Flare away from the portal. The elementals overran the floating city and what became of it is now a mystery. Hamus sailed as fast as he could until a dying government conspirator triggered the arcane explosive in hopes of getting his revenge on James Hamus.

The explosion tore through the ship and sent him crashing into a lake near the Duchy of Wolven Fang. Other than himself, the only other survivor was Mister Christopher. Together, along with help from the locals, they rebuilt the ship and called her the Lone Wolf. It was in Wolven Fang that Hamus formed a bond with another important member of the crew, the Aerunda, formerly known as the elemental within the core crystal of the ship. The detonation of the arcane bomb linked Hamus to the crystal and while he could not release it's prisoner, it allowed them to speak and thus an eternal bond was formed.

As time passed, brigands and thugs from a group called the Orion Syndicate began to strike at the Lone Wolf, trying to steal it's impressive technologies for themselves. The ship was too big to hide and despite his efforts to lay low, Hamus was put under more stress than ever. He left Wolven Fang and set sail with Mister Christopher as his only crew and together they drank the days away, sailing southward forever.

Eventually, after weeks of drinking and soul-searching, the Lone Wolf unexpectedly crashed into the tip of what was known to it's people as the Twilight Peak.

This time, Hamus and Christopher were welcomed with open arms and the Captain was quickly elected to be their Chancellor. It was time to turn over a new leaf and once more work for the people. Hamus built a new ship, Neptune's Thunder, and used it to quickly establish trade routes between Twilight Peak and it's neighbours, Caradoc Hold, Ravenwing and even Wolven Fang. During this time, he took up the title Commodore and a had a massive weapon built in honour of his new life. It looked like gold but was strong as steel. In the shape of a dragon's head, Hamus's dragon gun was born.

Near the end of his term, the shire of Twilight Peak came under dark times and a massive battle against seemingly unending hordes of undead was fought. Captain Hamus sailed Neptune's Thunder into battle and laid many souls to rest before his ship was struck by a rogue bolt of Twilightning, the raw magical backlash of the Twilight Peak. The bolt caused Neptune's Thunder to plummet and Hamus was forced to remain on board to steer it into the sea.

When he awoke, Hamus was wrecked on a small sandbar in the middle of the waters between Twilight Peak and Caradoc Hold. It was winter and he had very little food on board. It was during this time the last defining moments of Captain Hamus were created. Firstly, the twilightning had struck his arm and left it's mark in the form of strange crystalline scales that grew into his skin. The side-effects of this transformation granted him an affinity with the natural elements and in his six months alone on the wreck, Hamus was forced to control it or be driven insane.

The second thing that happened was the addition of a water elemental into Aerunda. The crystal was also affected by the twilightning and as the charged gem hit the water, an unfortunate elemental was consumed and locked within, forever destined to share the same fate as the air elemental before it.

The captain was rescued from his icy wreck by Captain Anne Cash who, completely by accident, crashed her ship into his wreck. She took him on board and he lived with her on the Phantom Skull until he was able to buld a new ship.

Captain James Hamus returned to Twilight Peak a few months later, flying a glorious new vessel he called the Zephyr. He quickly re-acquainted himself with Mister Christopher and began recruiting a new crew.

In time, he would go on to discover an ancient tome known as the Draconomicon that would inspire him to become a dragon-hunter, lured by the promise of great riches and fame.

Captain James Hamus still calls Twilight Peak his home and to this day the Zephyr can be found in it's harbour.