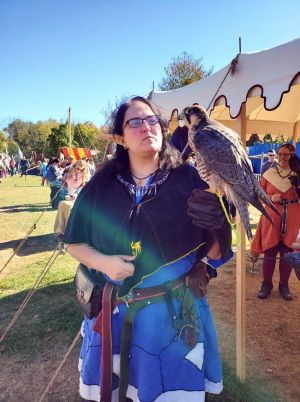 "**maniac giggling** You think I have titles!" - Kai's response when asked what her titles are (note: Kai got titles and can no longer giggle at this question)

Kai started to play Amtgard back in 2000 at the Shire of Crusader's Cove (Now known as The Port of Winter's Night ) She held various positions during her time there. Her longest being PM. In 2005, She was made a Man At Arms to Sir Zodiac Darkjester. Kai fell out of the game about 2007, due to real life issues. Shortly afterwards, she turned to Dagorhir after meeting up with an old friend. In 2012, she returned to Amtgard at Bridge Wars where she won the Archery Competition. Kai was immediately scooped up by the Temple of the Vanguard for her accomplishments.

Between 2012-2015, Kai played mainly at Amtgard events and Misty Hollow. She cross gamed for a bit, but stopped once her schedule became full with foam swinging sports. During this time, she was elevated from Man At Arms to Squire. She also decided to get her head out of her ass and start to actually do A&S and service. During a V8 field test game, Kai dressed in an overly colored coat while fielding with a drum and short sword. She played assassin and spent the game trolling people after a wizard gave her Void Touch.

In 2015, Kai moved down to Kentucky and was forced to changed parks by Wat; who plopped her to Sky Harbor. Kai eventually became the PM of the park. She continues to do A&S and service for the game. Eventually, she switched parks to Madoc's Keep for reasons. In 2016, Kai was elected as Regent for the Kingdom of the Rising Winds (which still amazes her). During an over night survival event, she "stabbed the shit" out of the Elven Arch Mage. In 2017, Kai acquired a Woman At Arms, Ariel of Misty Hollow. Also, within the span of 24 hours, Kai went from Regent to Incoming Monarch (since she was the only candidate that qualified) to Pro-Tem Monarch of Rising Winds. While Monarch, Kai also acquired a Man at Arms, Lord Tregod of the Grim Garrison. In 2019, Kai became the Prime Minister of the Grand Duchy of Ebonmarch. While in office she ran an auction that doubled the Grand Duchy's coffers. Kai also left Temple of the Vanguard and joined Scions. She was also elected as Kingdom Prime Minister.

She was crowned Monarch of Rising Winds. This was done due to seeing the bs in the game and a promise she had made to her Knight years and years ago. Kai hopes to bring a positive change to the game by encouraging others: either on or off the field, crafting all the things, doing service, or whacks (even though she a stick-joke).

She is known for her anime elf ears, blue shell tunic, and horse tail. She also has many pockets on her belt; mainly thanks to Battlecry gate favors (thanks guys). Since her name is Kai and she made a promise; she does have the King Kai garb from DBZ. No, she will not teach just anyone the Kaioken. You have to prove yourself first.