Lancer-at-Arms Kava Goldmane, of the Duchy of Iron Hold, Kingdom of the Desert Winds 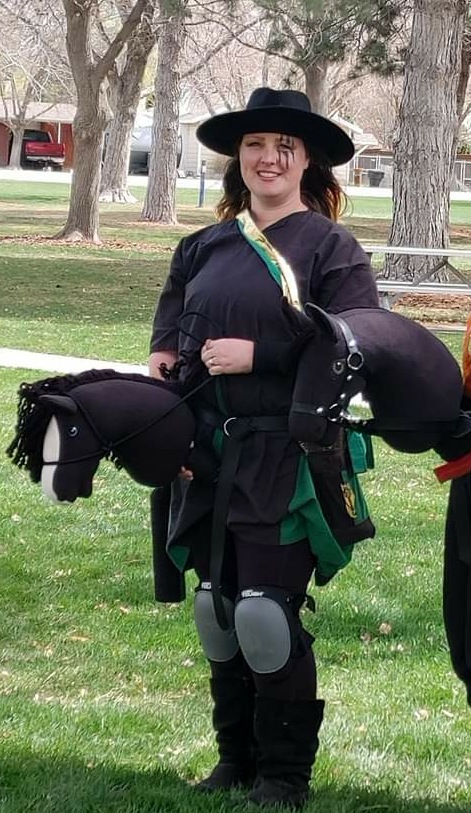 Kava Goldmane, April 9, 2022, in the Duchy of Iron Hold in the Kingdom of the Desert Winds. Photo by Guardian Drū-Kära Silverblade.

Mundane Bio- My name is Katie. I share a love of horses with my persona and a love of creatures. I am a stay at home mom with far too many hobbies. I love to read, play video games, and create. Favorite food would be tacos and favorite dessert probably mango sticky rice and zebra cakes. Chocolate goes a long way too for me. My favorite color are greens and blues. And my favorite animal is (of course) horses and elephants. My goals for Amtgard are to achieve Serpent Knighthood and to remain healthy and active by battlegaming.

Kava Goldmane is the current stable owner of Goldmane Stables. The stables were founded by her grandfather and have been passed down to her.

As a young girl, Kava was playing in the woods near her family farm when she found a young girl also playing. They played together for a time until it grew dark.

They had wandered very deep into the woods. They were then set upon by a werewolf. Kava tried to defend the other girl but was injured terribly in the fight. Just as it seemed she was about to be killed a fae lord appeared and dispatched the werewolf.

The young girl Kava played with was the daughter of this fae lord. The Lord had seen how Kava tried to defend his daughter and granted her a boon as a reward.

She was healed as much as he was able. Scars remained, but she was prevented from transforming into a werewolf herself. During the full moon she may portray wolf-ish features but she never fully transforms.

After this encounter Kava saw the body of the were wolf change back into a human. She felt pity for the person; sparking a lifelong curiosity, respect, and love of creatures magical and non magical alike. She has a hard time trusting people, though she is kind to them.

Between running the stable and studying creatures in the wild Kava is very much an animal person. She is proud of the horses she breeds and trains them herself. Her beloved Shire horse Monty is her most trusted companion.

Shield Member of the Wolves of Odin Fighting Company

Kava Goldmane is now in service as a Lancer-at-Arms to Guardian Drū-Kära Silverblade as of May 7, 2022.

Regent, Duchy of Iron Hold, Kingdom of the Desert Winds, February 2022 to present