Barones Keena Brünnhilde Rôkasuluk, of the Duchy of Ivory Tower under the Kingdom Of Rivermoor

Keena Brünnhilde Rôkasuluk Means Keena-Brave; Brünnhilde-name from an ancestor on mother side; Rôkasuluk-Ravenwing, Father family were archer who was known for using raven father on arrows.
Keena started her Amt-life in 2012 in the Barony of the Ivory Tower. You will see her on the battlefield with braids in her hair. But in court, she lets her hair down. She is always ready to help with armor, feast, and clean up. The Norse Goddess and Gods are her guides. She fights with a bow and a sword at her side.
Off the Field, she is known for her scribe work, was given the First Dragon by Baronet Zhao Squall of Barany of Ivory Tower because she made the awards for him and then told to make it her self then received her second for making the First.
Was made Lady at Curse of the Great Pumpkin 2014, by the Duke Baronet Roken Clydeson of Duchy of Ivory Tower, before he steps down.
Was made Barones at her homeland of Ivory Tower in 2017 by Marquis Etiene de Money.

Taken Monukso as a page in 2015. In 2016 Monukso was call back to the family estate. Keena Hope, he will come back to Ivory Tower soon. 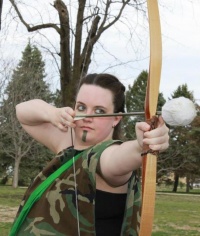 Please email me it you need anything at keenaravenwing@gmail.com