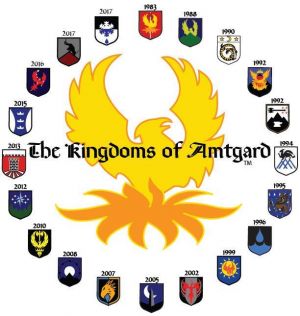 The Heraldry of each active kingdom of amtgard listed in the order of their founding. Made by Alona TwoTrees.

Per the V8 Rulebook

Kingdoms in Amtgard are large geographic regions responsible for all of the Amtgard groups (called ‘Parks’) and members within their area of influence. Kingdoms have authority over their constituent Parks and are responsible for helping them succeed and grow. Kingdoms typically have the following leadership positions (called 'Officers') which are elected every six months:

In charge of organizing the group for the duration of their reign in office. They are the highest authority in the kingdom.

Assists the monarch in the organization of the arts and sciences during their reign in office by doing such things as holding workshops, cultural tournaments, and craft nights.

Assists the monarch by making sure the kingdom financial records and attendance records are in order during their reign.

Assists the monarch by running fighting tournaments, organizing battlegames, and checking weapons and equipment for safety during their reign.

The head reeve is in charge of settling any rules disputes, making sure that all reeves are qualified and doing their job well, and advising the other elected officers on any rules issues they may have.

There are two basic styles of Kingdom Government; Floating Crown and Static Crown.

Rights of a Kingdom

Kingdoms can bestow any awards, including four Orders of Knighthood. Knighthood cannot be granted without authority from a Kingdom.

There have been 23 kingdoms to date in the history of Amtgard below are those that remain active in the order they were founded.

Also keep your eyes on

How to become a Kingdom

In recent times, there has been a surge toward the creation of multi-group entities such as Principalities, Grand Duchies, Confederacies, etc.

While this has led to smaller Amtgard groups operating as a Roving Crown Kingdom would, which inherently is not a bad thing, it has posed some difficulties when it comes to how a group would normally achieve kingdom status.

To combat these issues, Amtgard Inc has set guidelines for this transition. They are as follows:

As of 2014 there is now a procedure for removing Kingdom Status. Here is a link to the procedure on Esam.

A word from players on the subject of Kingdom Status

I've made it clear that I will accept Principalities, etc., for kingdom status as long as the provisions I've laid out are met. The specifics of this can be found here:

We will not accept ten shires of ten members each, spread across the country attempting to become a kingdom. We will, however, accept a cohesive set of groups that have the willingness and determination to travel, support a single group, and operate loosely like a kingdom.

I personally don't care what a kingdom calls their groups, be it principality, grand duchy, etc, as long as the group abides by contract, the RoP, the CoM, and is working toward the betterment of Amtgard as a whole. I will gladly support any group that does so.

The only other qualification that is not listed on the referenced page is this: The group must have a representative come before the CoM the year before they come up for a vote for kingdom status. This is to give the CoM plenty of time to come to an educated decision.

If anyone has any questions, I'd be glad to answer them, either on the list or in private email.