”I'm kinda busy today, so if you could cut me a break and be insulted that would be great.”

”Reality has absolutely no bearing on what is going to happen today.” 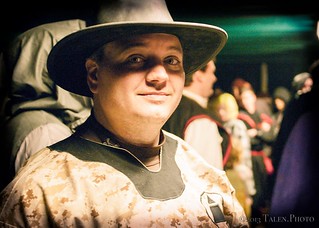 Larin is Most known as the founder of Amtgard's first radio station, RedHawk Radio, and co-hosts Radio Free Amtgard with Forest Evergreen. He is constantly referred to as dead by the Justicars because it infinitely upsets him.

Larin earned his Master Dragon & Master Bard in EH's Distant Past. His Master Rose on the other hand was granted by King Elder Vermillion, also in Emerald Hills, in April of 2006