Liz Ellerou, the Shadow Dancer, is a 15-year-old human girl commonly known as Liz. She appears to be 13 with brown hair, green eyes, average weight and is around 4'5"

Liz Ellerou arrived in the lands of amtgardia, where she was found as a newborn by Bonnie the Broken Wench, who became her only family as her adoptive mother. Bonnie raised Liz in the Dutchy of Wolven Fang. Liz lives in an inn and works as a scullery maid in The Salty Wench Tavern, formerly owned by Captain William Red.

Liz Ellerou Believes that when you die, you go to the void until the two phoenixes decide you may go back. Liz considers monsters equal so long as they aren't savage and follow the law. Liz ellerou tries to respect and follow the law but will break it if she believes it's necessary. Liz enjoys bounties, taking ones for monsters and has killed a few monsters during these bounties.

Liz Ellerou respects most of the citizens of Wolven Fang and those she met when she travelled in search of Bonnie after she disappeared but found her in Sivla Urbem.

a cat person assassin that was last seen prowling around in Black Snow Bay. 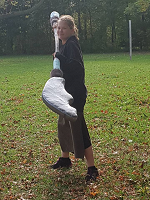