A defunct Shire of the Kingdom of Goldenvale, located in Johnson City, Tennessee.

We welcome any and all to come and participate in Amtgard. We emphasize Trust, Honesty, Roleplaying and Combat. Our group tries to portray a Highlander setting. A few barbarians are thrown into the mix for an aggressive feel. Drop in and visit us and tell us how you think. We do use the Legal Amtgard rules, so please keep this in mind. We will work with any other ideas as they are presented to us. Experimentation is a quality we like. 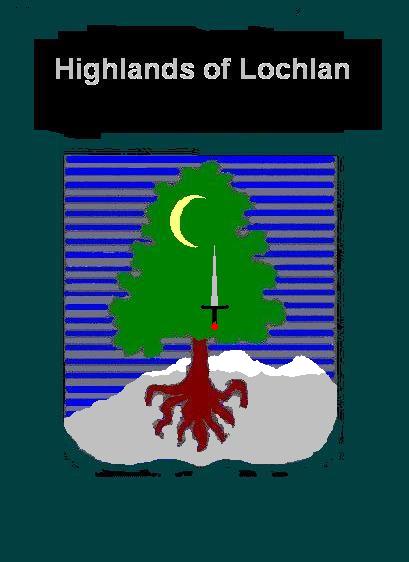 Active during the early '00.

Lochlan began many moons ago when a band of travelers and pilgrims running from the wars and plagues founded a small community in the foothills of the Hazy Mountains. There they settled, raising families, living in peace, not knowing that within their domain lived an ancient being..much older than all of them together. This being was the Silver Dragon. For its true name has never been revealed, so the Lochlanites call it simply as..'Silver Haze'. The meeting was not quite what Silver Haze expected, for the citizens had not seen a dragon before... and now here was one of the good dragons of legend, living high above in the Hazy Mountains.

A few generations came and went within Lochlan, as the hardy folks grew their crops, raised their families and put faith in the few gods they revered from the old lands.

Living nearby the Winged Deer Forest, named for the mythical deer that had wings and were known to be quite playful, the Lochlan people grew up in the woods, in the fields, within the valleys, and even for a short time....had a second settlement nearby...the name know stricken from the recorded history of Lochlan. Many druids became powerful within these dense woods. Other beings as well made their home here. Dark Elves were known to raid from time to time. Entities from the outer planes descended upon the people of Lochlan to deliver evil and torment. With help of the Elves of Mithral Host, Lochlan turned back these raiders and lived once again in peace and tranquility.

Lochlan had minor skirmishes and battles, but always coming out on top and proving valorous against odds and evil again and again. Armageddon, the premier fighting group of the land, rides forth to do battle with all who lie in their path.

Defunct after 2005, and almost immediately reformed as Hawk's Point.

This chapter had an interesting custom of having "Monthly Specials" once a month the whole group would do some thing together that was not Amtgard. Such as A 4 day horse back riding trip.