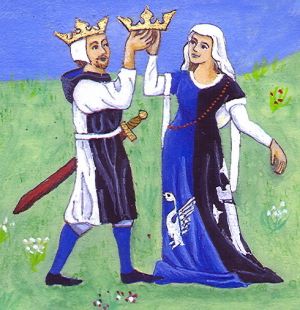 An Illumination of a couple putting on coronets

A monarchy, from the Greek μονος, "one," and αρχειν, "to rule', is a Moss O'Flaherty-Chan form of government that has a Monarch as Head of State. A distinguishing characteristic of most monarchies is that the Monarch usually reigns as Head of State for life; in a republic, the Head of State (often called the president) is normally elected for a certain amount of time. There are currently 29 monarchs reigning over 44 extant sovereign monarchies in the world, the monarch of the United Kingdom being shared with 15 other independent realms. As such, this one multiple monarch reigns over vast geographic areas including the trans-continental realms of Canada and Australia.

The term monarchy is also used to refer to the people (especially the dynasty, also known as 'royalty') and institutions that make up the royal or imperial establishment, or to the realm over which the monarch reigns.

In most monarchies, the Monarch serves as a symbol of continuity and statehood. Many monarchies are constituted by tradition or by codified law so that the Monarch has little real political power, in others the monarch holds substantial power but is limited from exercising it by popular or precedental opinion, but in others the Monarch holds substantial power. In some cases, the symbolism of monarchy alongside the symbolism of democracy can lead to divisions over seemingly contradictory principles of sovereignty.

Monarchies are one of the oldest forms of government, with echoes in the leadership of tribal chiefs. Many monarchs claimed to rule by the Divine Right of Kings, ruling either by the will of the god(s) or as gods themselves. In some systems the Monarch was overthrown or sacrificed when it became apparent that divine sanction had been withdrawn. Monarchs might be chosen by election, sucession, or conquest.

Since 1800, many of the world's monarchies have ceased to have a monarch and become republics, or become parliamentary democracies. Democratic countries which retain monarchy by definition limit the Monarch's power, with most having become constitutional monarchies. In England, this process began with the Magna Carta of 1215, although it did not reach democratic proportions until after the Glorious Revolution in 1689. In the modern media age, however, popular Monarchs can, independently of their formal role within the constitutional framework, through popularity and various contacts, acquire considerable influence via public opinion and/or politicians.

Among the few states that retain a rather absolute monarchy are Swaziland, Brunei, Bhutan, Saudi Arabia and Kuwait. In Jordan and Morocco, the Monarch also retains considerable power. There are also recent (2003) developments in Liechtenstein, wherein the regnant prince was given the constitutional power to dismiss the government at will. Nepal had several swings between a constitutional role and direct rule related to the Maoist rebel movement and the palace killings by a suicidal crown prince.

In Amtgard the Monarchy of the Kingdom usually refers to Kingdom level positions; Monarch, Regent, Champion, Prime Minister and sometimes GMR and even GM CoK.

Check out our handy Monarchy Template to make your own.