Order of the Griffon

An award given for courage, chivalry, and honor on the battlefield or in a tournament. Also spelled Gryphon. 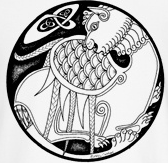 Template made by Alona Twotrees

Once Before Award Standardization In some Kingdoms these could stack with Lions for a Master Lion, however this is no longer the case. A Masterhood in the Order of the Griffin was also once a ladder award, leading variously to a knighthood in the order of Sword or Flame.

Excerpt from the corpora

For the Order of the Griffin, written by an unknown wetlands author.

Qualification for Masterhood: 10 Orders of the Griffin

Given for: courage, chivalry, and honor on the battlefield. This is a high level awards and provincial leaders are strongly urged to consult with the Monarch before bestowing this award. This award is also one of the highest orders given. It has been witnessed to be given for accepting defeat graciously, fighting with respect when fighting a lesser opponent, and fighting for the Honor of your Kingdom, emphasizing on honor and gracious defeat. This type of description takes the pressure off of winning and stresses honor instead. All these combined and more can earn a Griffin. The following are for the minimum qualifications to get that number of Griffins.

Limitations: None, however a minimum of 10 of this order are needed to qualify for Masterhood.

Belt favor: Blue belt favor with a white border and diagonal mark across the bottom. Masterhood will be denoted by a gold braid or ribbon down the middle.

SUGGESTED criteria: All criteria listed here are just that, 'suggested'. They are BY NO MEANS requirements. This Monarch's Handbook is NOT intended to be a barrier between DESERVING individuals and their just rewards; rather, it is intended as a guideline for groups to use for rewarding their populace. If it can be generally agreed that a person deserves a certain award, even if they may not quite pass muster by the letter of This Monarch's Handbook, then they should probably get the award anyway.

Number of awards, Criteria, (not to be confused with who can give them, refer to "given by" for that information)

1st A new member showing honor on the battlefield (as described above) in a Battlegame or War.

2nd-10th+ If a member has already earned their first Griffin it is preferable that subsequent displays be of equivalent or greater magnitude act of Chivalry, Honor, and Courage that exceeds the previous one.

Masterhood - is granted once all the criteria has been fulfilled and the Monarch feels that nothing else is required. In the instance where awards have been garnered from another Chapter it will be up to the discretion of the Monarch with input from the Masters Griffins to decide if additional criteria is required.

Note: The higher the level, the harder it is to achieve more orders of the Lion or Griffin. No one has ever achieved Master Griffin status (10th level or higher) without losing many a battle and still be able to keep their humor. This type of award takes the pressure off of winning and stresses honor instead.