For the purposes of this article we have combined the major pieces and styles of clothing from Middle east, Persia, and the Ottoman empire. 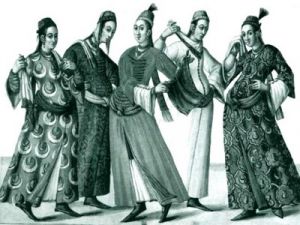 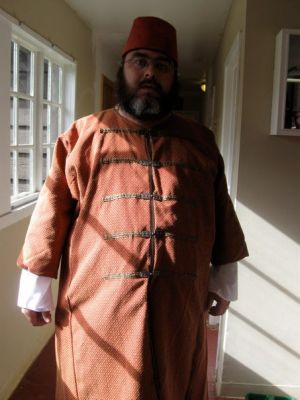 The Ottomans (also spelled Osmanli, Osmali) The Ottoman Empire ruled Turkey and parts of Southeastern Europe, the Middle East, and North Africa from 1299 to 1922, although it is best known for its Golden Age during the 16th Century under the rule of Suleiman the Magnificent (also Suleyman). At its height, the Empire dominated both the Silk Road trade route and the Mediterranean, spread Islam throughout the region, and blended Seljuk Turk, Persian, and Greek influences to develop, among other things, a completely new style of architecture. Stunning examples of this include the Green Mosque in Bursa and the Topkapı Sarayı (Palace) in Constantinople. The latter survived the centuries and is now a museum, which houses an extensive collection of Ottoman artwork. Unlike most other cultures, the Turks did not appear to sculpt. Instead, they boasted of luxurious fabrics (velvets, brocades, and silk) and pottery & ceramic tiles. Painted miniatures existed as well, dominated by scenes of the Sultan and his men hunting, fighting, working, or in court. These miniatures depict the vibrant colors and distinctive shape of Turkish clothing: a bell-like shape, tight through the torso with side gores from the waist to the floor. Paintings? Didn’t the Koran prohibit the depiction of human figures? Actually, it was Muslim law, not Koranic doctrine, which enforced the tradition as a way of preventing idol worship. Yes, most court-approved painters restricted themselves to elaborate floral and geometric designs. Some, however, unofficially and quietly did portraitures, especially of the Sultan and his court. 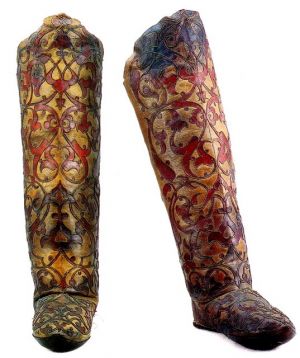 The following 8 pages are in this category, out of 8 total.