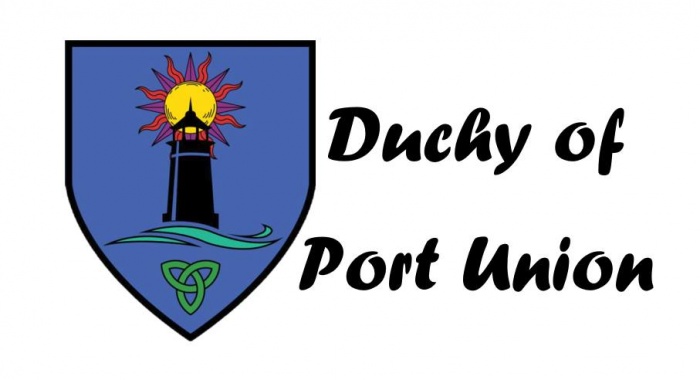 Welcome to Port Union, a Duchy within the Kingdom of Crystal Groves in the realm of Amtgard. Port Union is an ever growing group with watchful eyes on the horizon for new fighters to join our ranks. Raised to excellent heights of Arts and Sciences, Service, Role Playing, and Battlefield Prowess; this group strives to be well-rounded. A family friendly group, our members range from early teens to grandparents. Free to play.

Port Union was formed on January 12th 2019, after a merger between Harbour of Rhye and The Locks.

Harbour of Rhye was originally located in Hampton/Newport News, this chapter is the combination of Sea of Rhye and Veles Harbour when joined together in 2008 and has received Barony status at Feast of Dead 2013 by the hand of King Marcus, and then raised to Duchy status by the hand of Queen Shiva at the 2014 Spring Kingdom Quals, under the Kingdom of Crystal Groves. After spending several years at Mt. Trashmore, Harbour of Rhye started playing at Chesapeake City Park. The Locks had the park on Sundays, so this made for a great partnership.
The original heraldry was a blue field with green anchor and five yellow rye seeds in a star-point shape along the shaft of the anchor. The heraldry changed per member voting as of January 1st, 2012.

On August 18, 2013, in a surge of growth, a new land was claimed for the brothers and sisters in the southern part of the Kingdom of Crystal Groves. In a show of support, many guests from near and afar came for the groundbreaking of the Shire of Lorenia. Although the heroes won the day for Lorenia monsters continued to harass the Shire. As its populace grew the Shire relocated to a land locked in by waterways, changed its name to The Locks and soon became a Barony. Monsters continue to plague the group but a small band remain faithful.

Formerly known as Lorenia, The Locks changed its name in the early part of 2014. Noted as the first chapter created after the advent of ORK3.

See Port Union Monarchy for a listing of previous officers for the Kingdom.

We meet regularly at Chesapeake City Park (900 City Park Drive in Chesapeake) at Shelter 11 in Section C (or the tree line to the left), on Saturdays and Sundays from 12 to 5 PM.