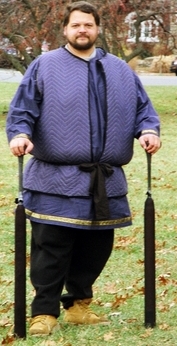 After fighting live steel for a few years I found Amtgard. It looked alot less painfull and more fun. Sir Crosser in FalconRidge helped me and a few friends found Mithril Keep in Cincinnati in October of 1999 and Ive been playing ever since.

Ive been in and out of Amtgard several times for personal reasons and keep finding myself pulled back in. It's like crack, once you start you can't stop. Ive held every office at the shire level several times and Baron of MK for one term. Unfortunately no chapter in Cincinnati has made is past that for long. I spent some time in Elkhart, Indiana playing with Thundering Rivers and am now back in Amtgard playing at Direwood Hold.

I prefer fighting florentine or pole and sword and board.

Former Squire to Sir Thorvald of the RW. None at this time