A defunct Barony located in Brantford, Ontario, Canada. Changed names to Bellhollow on 4/1/2014 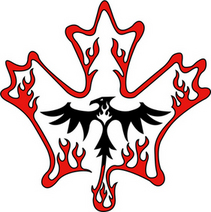 Ravenwing regularly holds meetings every Sunday between 11am and 3pm (or later), near the splash-pad at Mohawk Park, Brantford, Ontario.

To get to the park, take the Wayne Gretzky Parkway exit from Highway 403 and head South. When you reach Colborne Street East, continue straight ahead onto Park Road South. Turn right on Glenwood Drive, and the park entrance is the first street on the left. Continue in to the park until you reach the Splash Pad, we are set up just off there.

Ravenwing was founded in April 2004 from the ashes of panther's Claw. The name was chosen by pulling words out of a hat until there was a combination accepted by all the founders.

Their next event on Febuary 12-13 2005 was Ditch Til Dawn, an all night charity event which raised over $600 for the Tsunami Relief Fund through the Red Cross.

The shire was officially sponsored by the Kingdom of Goldenvale in August 2006. Ravenwing was upgraded to Barony status at Fury of the Northlands on Sept 6, 2009. The park's sponsorship was later revoked in December of 2010 by Goldenvale Althing decision.

The remaining players of the park operated as a Freehold.