In order to ensure that the Park is following the rules, and that the game is being run fairly for all participants, members of the park may also choose to become members of the Reeves Guild and take credit in the Reeve class. Reeves are the judges or referees of the game and will wear or carry a unique identifier to reflect this status. This identifier will be either a gold sash, a tunic or tabard of alternating stripes of contrasting high-visibility colors (black and white, neon green and purple, etc.), or a “Reeve’s Staff” (a padded staff at least 5’ long with padded ends at least 2” in diameter and covered in alternating stripes or spiraling contrasting high-visibility colors as above). The identifier will be communicated to players before the start of a game. Reeves should have in-depth knowledge of the rules, and are tested by the current Guildmaster of Reeves to become members of the guild. When a reeve is in charge of a battlegame, their word is final on disputes involving game play. If a player wishes to dispute a reeve’s decision, they may do so after the game with the reeve in question or with the Guildmaster of Reeves. However, while the game is occurring, the decision may not be disputed. Arguing with a reeve on the field may result in being penalized or even ejected from the game. Consistent arguing may result in being removed from play for an extended period.

A Reeve is like a referee in Amtgard. It comes from Old English, the word "Sheriff" actually came from "Shire Reeve". It was an official, judge, etc.

Reeves are charged with running battlegames, wars, tourneys and making sure that everyone follows the rules, solving disputes, and advising the players on the rules. They are governed by a Guildmaster of Reeves, who is elected from their number. Reeves must pass a Reeve's Test to qualify as a reeve, generally every six months to maintain standing. This may vary from kingdom to kingdom.

It should be noted that a good battlegame reeve is not necessarily a good tourney reeve, and visa versa. The former requires primary knowledge of the rulebook and the ability to keep a game flowing and balanced. The latter needs a good eye. They both need the ability to make a tough call when needed.

Reeves are designated by wearing a gold tunic or sash. They may never be attacked in any battlegame scenario. The reeve's word is final, if you disagree take it up with them later, or the GMR.

Excerpt from the BL Corpora 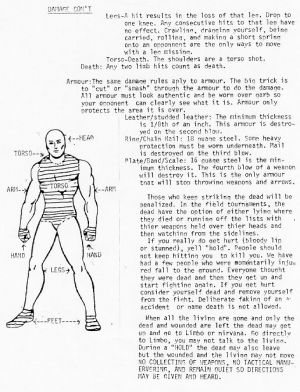 Page from the 2.0 Rulebook displaying the legal hit locations

2.23 Reeves are responsible for the following:

Reeves are an extremely important part of the Amtgard experience, as they are the individuals who are charged with attempting to ensure the safety and enjoyment of the game participants. Here are some helpful suggestions to being an effective reeve.