A Shire of the Kingdom of the Rising Winds, located in Paducah, KY.

The Riverlands (formerly Blüdfrost) is a Shire of Amtgard - a live action boffer combat game with medieval reenactment undertones - operating out of the city of Paducah in western Kentucky. 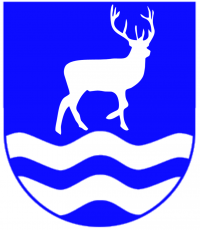 The group's Heraldry is azure, a buck argent passant toward sinister over a stream argent.

On November 18th 2012, via allthing, Blüdfrost voted to change its name to The Riverlands. The name is a reference to the region's four distinct rivers, which results in many buisnesses and organizations utilizing the Four Rivers moniker. The park went defunct in October 2014 due to lack of leadership but reformed in April 2015.

For a full listing of officers, including current and former since the park's beginning, please see here.

Personas in The Riverlands are allowed to be from any time period, as long as the weapons still meet current Amtgard standards. This is explained via a basic storyline that there is a time anomaly/portal near Blüdfrost that occasionally catches people from different settings/eras and exiles them to the park. This allows for some interesting and very unique boffer personas.

The park currently plays a light version of InterQuest.

Blüdfrostians formerlly partook in a land control game from one session to the next, where players are able to challenge via dueling other players for fictional hexes of land. The Blüdfrost map, which coordinates directly with the shape and size of the park the chapter plays in, was divided by hexs that could be controlled by players, whether individually or by House/Company.

The Riverlands weaponmaster tournament and dragonmaster competition is known as the Blüdfrost Occasional Fight Festival or as B.O.F.F. - named after the original name of the park - and it is held twice annually. Sign-ins are taken in advance online and at-park via the Blüdfrost Occasional Fight Festival Event Registration (B.O.F.F.E.R.). For a history of outcomes, please click here.

The Riverlands currently has two local relics in use: a pair of Gauntlets of Ogre Power and a Compass of True Sight.

A in-joke a ficticious faction within the shire is Puns Deep (sometimes stylized as Püns Deep, Pun's Deep or Pün's Deep) after the nature of pun abuse by members. The faction is made up of out-of-time-and-place personas, trolls, and jesters who act as a quest opponent for the shire at large.

For a listing of Officers of the Park, including past officers, please see The Riverlands/Officers. For a roll of arms depicting the heraldry of players in this park, please see Riverlands/Roll of Arms.

For a basic listing of players with articles on Amtwiki, please see the chapter's user category.

For quickest reply, please contact the Chancellor who will field the questions for other officers.

Back To: Amtgard → Chapters → Kentucky → Blüdfrost